Discovering the local volcano and other things…

How is everyone? Apologies for being a bit quiet for a while! I’ve been having issues with WordPress who host my blog. Anyway, it’s all sorted now (at least for the time being!) and I’ve got quite a bit of updating to do from the last month or two. I’ll try and summarise!

The first update is that my poor Batfink lost his fight a day or two after the last blog post. It’s been horrible. We were a good little team. It’s always heart wrenching losing a pet; they’re like members of your family aren’t they? But I think we had quite a special bond, us two in particular given everything that we’d been through together in the last year or so. I miss him.

A few days after Batfink passed away, I heard meowing coming from a hedge by the gym. I eventually located it to a tiny black kitten. To cut a long story short, I ended up adopting her, despite my better judgement. She’s not got a name yet – I’m a bit nervous to give her one lest I get too attached and something happens to her. In fact, she went missing for 4 days a week or two back and I was convinced she’d died too but I was thrilled to be proven wrong.  Anyway, I’m pleased to report that her and Rusty Carrot (he’s gained a name) have finally bonded after an initial settling in period which involved a great deal of hissing (Kitten isn’t much attuned of social cues and so didn’t let it upset her).

So that’s the cat update. I’m very much hoping further cat updates will be less traumatic, at least for a bit!

Meanwhile I’ve been out and about as ever. There’s a continuous string of festas here during the summer and it’s difficult to justify being at home when I could be seeing jazz, or blues, or dancing or seeing medieval games, or going on walking excursions or painting excursions or eating cheap pizzas etc. I used to think London was hectic with things going on all the time but I don’t think it’s a patch on Le Marche in the summer months.

The weather has been absolutely roasting too and the countryside has been spectacular with sunflowers and hay bales stretching across landscapes as far as the eye can see. 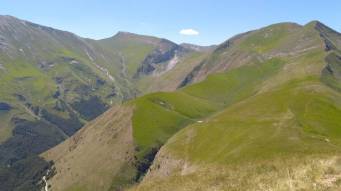 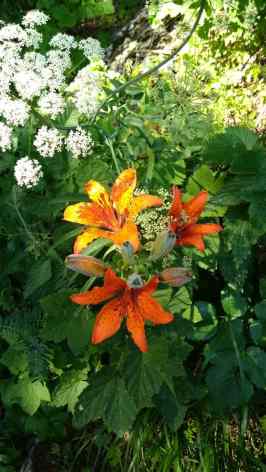 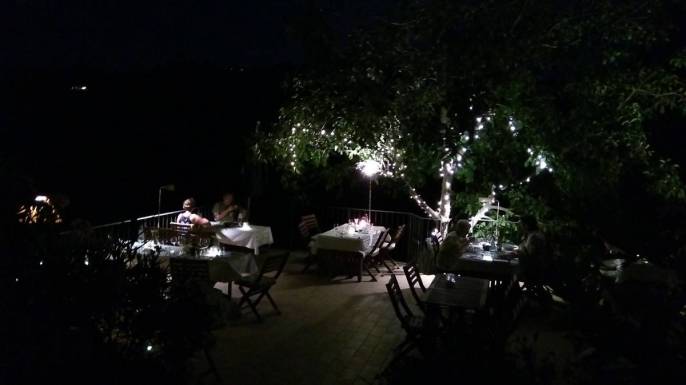 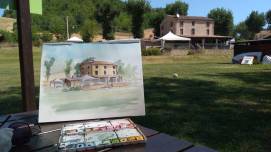 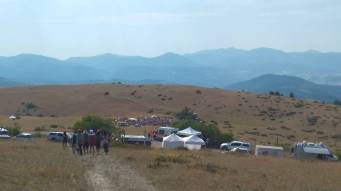 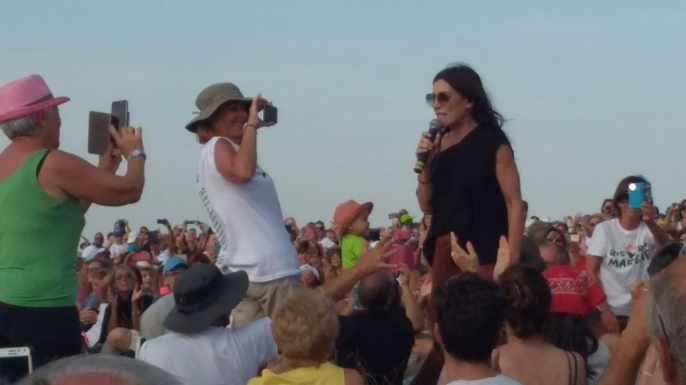 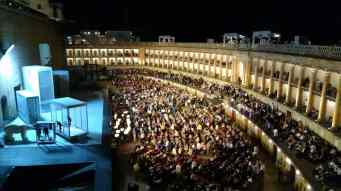 I finally went to see the Roman Theater in Piane di Falerone. It’s just 10 minutes down the road from me so it’s been on my list a while. It’s difficult to get to see it – it’s open Sunday’s between 4pm and 6pm (sometimes) and costs 3.50 euros.  You can organise a private appointment to see it by asking a woman in the local newsagents who knows a man who knows how to get someone there to open it. There are events there occasionally and so I’d recommend trying to tie in your visit with that so you get more out of it and there’s slightly more chance it’ll be open! 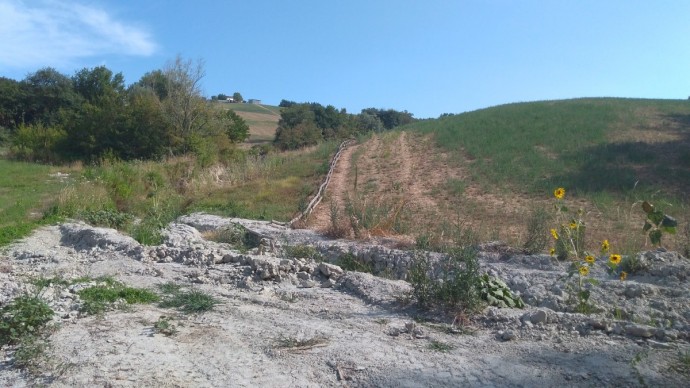 The Volcano (admittedly I’ve since discovered it’s called Vulcanelli di Fango – little volcanoes of mud, but still I think even that’s a bit of an overstatement)

So that sums up the last couple of months. Sorry it’s been such a long update, hopefully the blog issues have now been resolved and I shall be able to write a bit more frequently!

I hope you’re all well! I’m utterly terrified to announce I have created a new blog called ‘A Painting Occasionally‘. I’ve spent a lifetime wanting to be an ‘artist’ and yet, I’ve been too much of a wimp to show anyone my work. To  be honest, the website still needs some fine tuning but if I delay anymore it just wont ever happen!

Due to the earthquake, I’ve had to move to a new apartment. It’s going well and I’ll update in the next few days but one of the positives to come out of it all is having a new artist buddy / landlord on hand to go on field trips with and having a lovely new area to explore.

So the blog is really just a way of charting my progress and hopefully motivating me to improve. I’m still trying to find my style and getting used to new mediums. At the moment I’m in a watercolour phase which is surprisingly tricky!

Anyway, this is just a quick update to point you to the new blog and if you want to receive painting updates, please ‘follow me‘ on that blog.

How is everyone? I had a lovely few days in Trentino. I took about a million photos. We stayed in a lovely hotel called Hotel Pinei which is in Castelrotto (not the town itself, the hotel was in the middle of nowhere but in the Castelrotto vicinity). It was a great setting with views across one of the valley towns called Ortisei. We stayed full board-ish (I say “ish” because although lunch wasn’t included, a merenda/snack large enough to be lunch was). 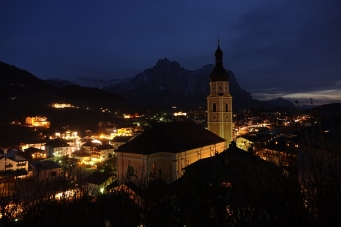 This is Ortisei captured horribly! Does anyone know how to take a photo of town at night with enough definition in the background without the lights of the town being too bright?! Anyway, Ortisei is lovely to wander around.

We spent the first couple of days skiing/snowboarding in Val Gardena and Alpe di Suisi. I haven’t snowboarded that much in my life in one go. I think there might actually be a tiny bit of definition to my stomach as a result just of those two days! I also make a new discovery: “bombardino”, a sort of alcoholic hot sickly yellow drink with whipped cream on top. Delicious!

The third day we went walking on the same slopes we’d been skiing on the previous two days. It was a much more relaxed way of seeing the mountains and a good opportunity for me to practice my photography without worrying about falling on my camera 🙂 I thought we’d have needed snow shoes but in fact there were lots of well trodden paths which were good to walk on. If any of you go and fancy doing something a bit different, they also have horse drawn carts to take you around and bikes with snow tires! In fact, we even saw some llamas being walked down the mountain. Perhaps llama walking is a thing there too. 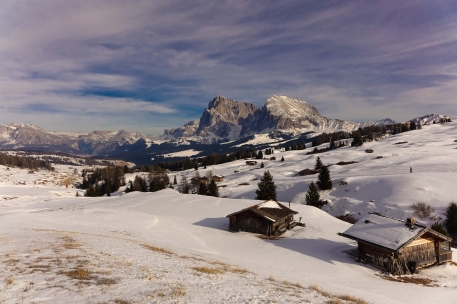 The scenery was spectacular

Tracks in the snow

I think this is a refuge – it just wasn’t open. There are lots of refuges (rifugi) dotted around though where you can have a drink and get something to eat

The mountains are sprinkled with these adorable little wooden huts. I wonder how much they cost!

The other place we went to was Laghetto (little lake) di Fiè which, despite the lack of snow in the surrounding area, was completely iced over. Apparently you can ice-skate on it. I did not take my chances and nor was anyone else. The lake is well worth a visit as it’s set high up in some woods and there’s lots of walks that start from there.

This was taken just around the corner from the lake

I think that about sums up the holiday. I’ll leave you with a photo from Filotrano taken a week or so back. It’s all so pretty everywhere at the moment, it looks like all the fields have been combed!

Hope you all have an excellent week!