Conero Crafts is open for business!!!

Well this week has been really good! I bring you my new shop, Umbria visits and some new art bits & pieces.

So after much deliberation, my shop is called Conero Crafts given my inspiration has come somewhat from the Monte Conero area. Click here to check it out 🙂

Excitement isn’t the word! I sort of accidentally came across this selling driftwood strategy – I was just intending to post some of my stuff up on Etsy, a reasonably well-known internet shop specialising in hand made products, but Etsy wanted a shop name before I could post and now it’s made me ambitious! I had my first sale today and I’ve been bouncing around the house ever since. I even have compliments slips. Exciting, exciting, exciting!

Here’s some of the latest pieces… 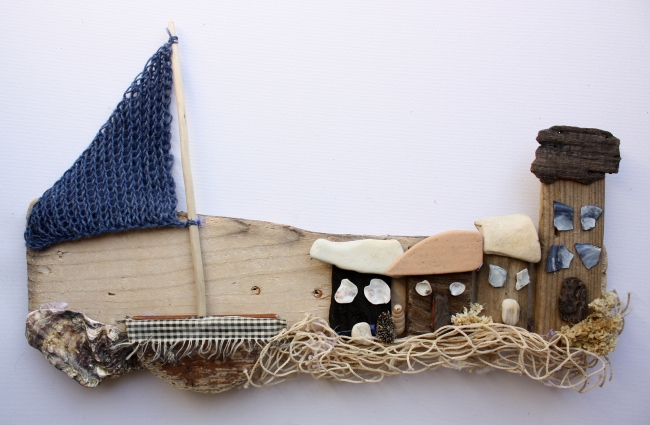 In other news, for “Pasquetta” (Easter Monday) we went to Assisi & Perugia (the we is myself and I shall call him for the purposes of anonymity, Pane Caldo).

Both Perugia and Assisi are beautiful places to visit. There was a nice little market going on in Perugia and after a quick wander around the centre, we had a long lunch where I ordered a Napolitan pizza not realising that it had anchovies on until my friend picked me up on it, so in a rush, I changed my order to a Napolitan without the anchovies. Otherwise known as a Margherita. I suspect that caused amusement in the kitchen.

Lots of eateries! I can’t remember which one I embarrassed myself in…

Then we headed to Assisi of Franciscan monk fame. I’d already been there once before a few years back but it was nice to look around again. 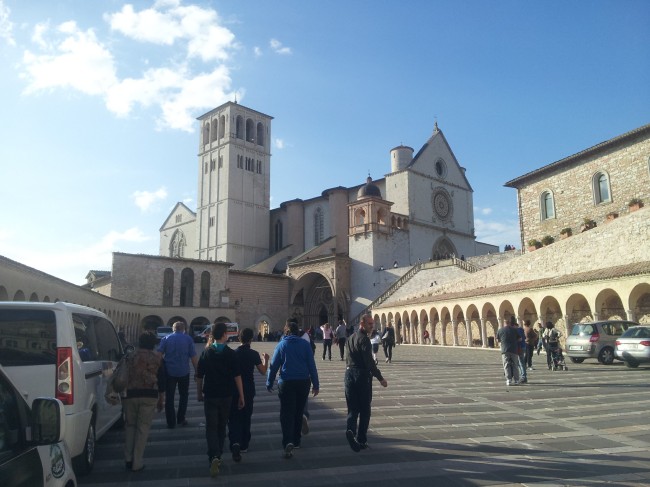 One of the main squares in Assisi…

Then earlier this week, I had a couple of friends over from London to stay. It’s always nice to see people from back home here and show them around. We didn’t get to see too much – I was at work for one of those days and there’s a fair bit of things around here to try and squeeze in. On the first evening we headed to Sirolo for an aperitivo and then back to Camerano to attempt to go to the trattoria but I forgot it shuts on a Tuesday. Then on Wednesday we went to Offagna, a beautiful hill top town with a big castle and fabulous views with the idea of going to one of my favourite pizzerias, “Sotto la Rocca” which I forgot shuts on a Wednesday!

This has been my last weekend in the Camerano flat :-(. I have accumulated quite a significant amount of stuff. I think it’ll take a couple of car trips at least to get the stuff to the new flat and I’m a bit worried that I don’t have a parking permit yet so we’re not even technically allowed to park outside to even take the stuff into the flat.

Right, onwards and upwards! Only 4 more weeks or so of teaching to go – woohoo!

Have wonderful weeks all.

Buona Pasqua (Happy Easter!). Good news this week – I’ve found an apartment to rent! It’s in Falconara – which is a bit further north than I am now, just past Ancona. It’s closer to the airport but also unfortunately closer to a massive oil refinery. It’s been such a challenge finding anything suitable. This place has two bedrooms, is ok decorated, has three balconies and is a couple of minutes walk from the beach. It seems like a lively enough area which might make a nice change. However, I’m so sad to be leaving Camerano. It’ll have been my home for almost a year and there’s so much about it that I love. In summer it’s fantastic with things to do and weird traditions (see The Big Tray Race post), the view is fantastic and it’s close to all the places I like. Alas, there are new students coming into the language school here so it’s time to make space for them.

The Big Move Date is 2nd May. So now I’ve found somewhere the stress is off a little but a new string of bureaucracy will start! Every time you move, you need to tell the Comune where you’re moving to (I’m going to place a bet that it will take at least 2 months and 7 visits to fill out the necessary paperwork)!

The other exciting news of course is that it’s Easter! So I’ve discovered some things about Easter over in here in Italy:

There were aisles and aisles of these… Very impressive display but see what I mean about the packaging? 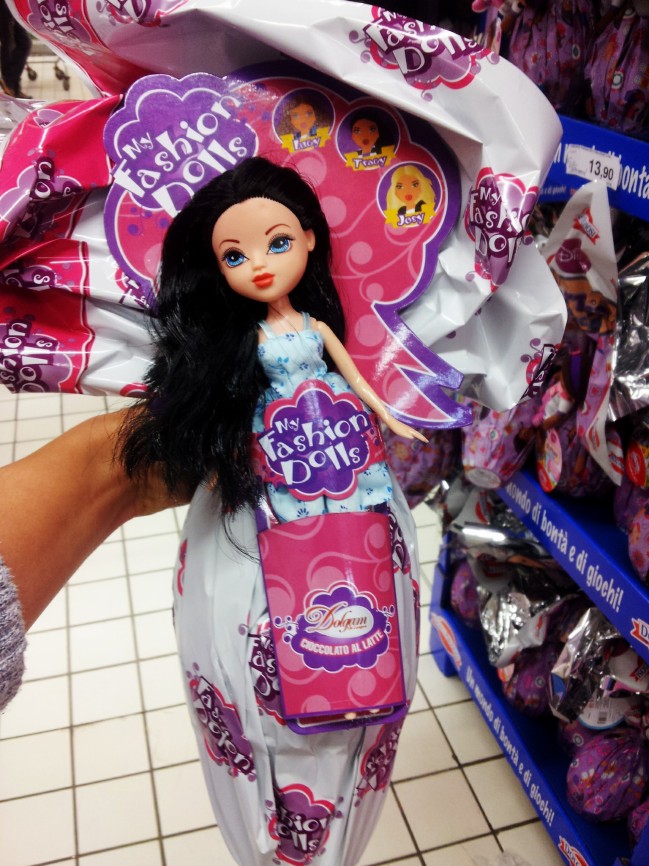 This is the one I wanted…

I have other good news this week. I had an offer accepted on a house in Portsmouth so that seems to be going ahead, albeit at a snail’s pace.  I had to get my identity confirmed by a solicitor or a notary (notaio). For that, they needed to fill in a one page form and sign a photocopy of my passport. A whopping 5 minutes work. So I eventually found a notaio that could speak English (my local one refused on the basis that she couldn’t sign off an English document if she didn’t understand it), in Osimo. I asked how much this would cost and she said “just come along and we’ll discuss it”. So they led me into a room and then the Notaio came in, signed off the bits of paper and then said “that’ll be 120 Euros please”. 120 Euros. I could fly back to the UK and get the thing signed off by my own solicitor for less!!! I haven’t paid them yet. On moaning about the extortionate price, he did drop it down to 100 Euros. That’s 20 Euros a minute. I should totally become a Notaio.

Well, I’ve been taught a lesson in responsibility this week. My actions have come back to haunt me. I had no idea that by calling in sick or going on holiday, that it meant I didn’t actually get out of going to work and that I had to make up the time! It’s not like calling in sick at my old work – they never made me go in on a Saturday or at Christmas to make up for it!!! This depressing turn of events unfortunately means I have to make up 2 hours with the Class of Evilness. Ugh. UGH.

Not ALL the kids at school are evil though… 🙂

Last week I mentioned about some of the challenges of finding a house to rent/buy, in particular, locating decent pictures of the houses. I retract it all…

This picture of a jug was complimented by two pictures of doors and a further two pictures of ceiling lights, thereby covering all of the essential features that I look for in buying a house.

Ok, over and out! Buona Pasqua tutti 🙂

Well, well, well! These last couple of weeks have been challenging somewhat! I can understand why house hunting is called that now and not simply house finding. I include below an illustrated account of just some of the house hunting hurdles here in Italy… 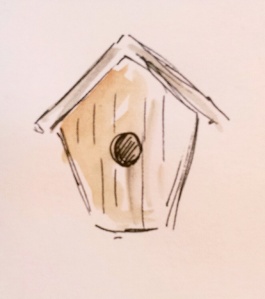 Erm. Perhaps not the most realistic sketch of a terrified person. (I’ve drawn him in a sleeping bag jacket though so that’s at least true to life) 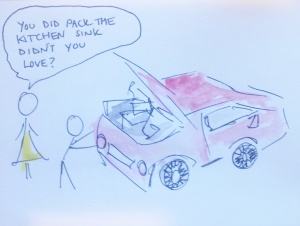 So, we’ve seen lots of places (I’ve a friend staying with me at the moment) and there’s one place that doesn’t seem so bad but it’s next door to huge oil refinery. It’s only going to be for 6 months or so whilst I hopefully find somewhere to buy here. In terms of buying,  I can’t get much for my money in any of the towns. I’m now thinking of venturing further into the countryside which could get a bit lonely but I think I’d prefer a nice house and some potential to make some money as a B&B or doing something with the land too in the long run.

It’s been a difficult couple of weeks – it might be because there’s an end in sight. I’ve got 6 weeks left! I lost my rag at the Evil Class last week again and told them I’m only going to do colouring in with them from now on (which I think they’re all thrilled about). I told the teacher that too. She said that I shouldn’t lose hope and that she thinks that on some very deep, deep, deeeeeeeep level they might have actually been listening. Ha!

I do have a lovely bunch of adults that I’m teaching though so that’s good!

I should stop making stuff now and get on with putting it online to see. I’m still struggling to find some decent deep frames and now some packing material so that I can send stuff to people. I think that will be this week’s task. And I need to try and take some decent pictures of these things too – how I’d love to have a proper studio! 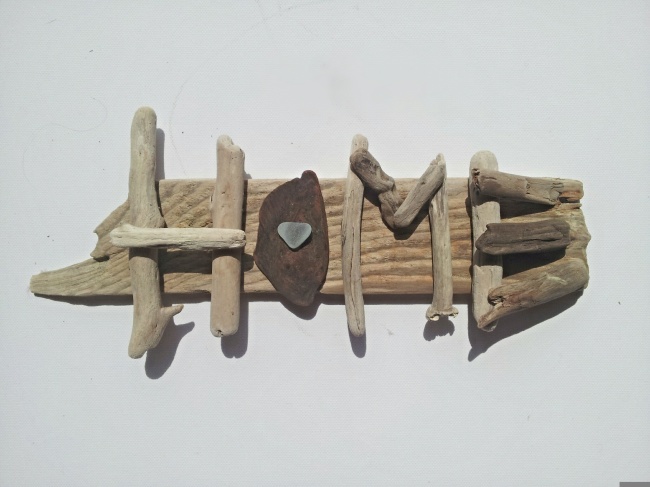 Driftwood home sign – now all I need is to find a home!!!

Spring is in the air…

In other news, spring is definitely in the air and it’s lovely! The daisies are out, the jasmine is blooming (I’m back to sneaking “cuttings” off the local jasmine bushes to bring back to the flat because it smells so nice!) and I’ve seen a few poppies now too. I can’t wait until I’ve stopped teaching and can get out and enjoy it a bit more!