For our third and final camping destination we headed to Pugnochiuso, a little area in the Gargano National Park. Heading from Monopoli, there are some lovely sites on the way… (For Part 1 and Part 2, click on these links)

Day 4: Go to Polignano a Mare. Polignano a Mare is only about 20 minutes from the campsite and it’s definitely a great place to visit. The old town is on a little promontory of rock. The sea around is just sooooo clear.  People were swimming around the town! The town itself is pretty with lots of poems and wise words written on the walls or staircases. We came across a couple of guys fishing from the town itself – the drop to the sea was probably 40 meters at least! 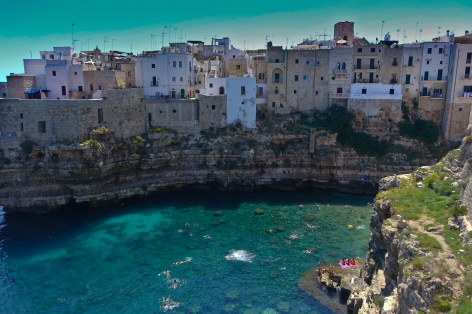 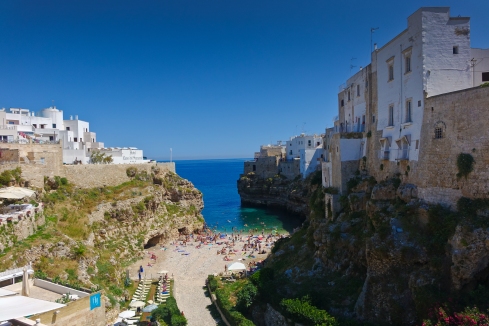 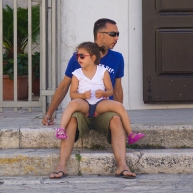 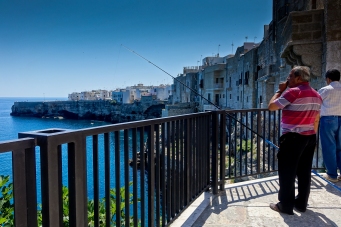 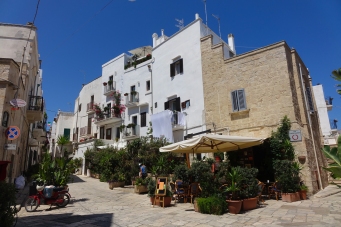 Then onto….. Bari. Bari is the capital of Puglia. I am somewhat biased against big cities; after living here in the mountains, I feel a bit claustrophobic when I’m hemmed in between cars and apartment blocks every which way. In fact, when we got there we couldn’t find a parking spot and I suggested we just give up on it and move on. I’m glad we didn’t in the end. We only had an hour there but it was nice enough. We found a castle to have a look at and did a bit of shopping and then decided to head further up the coast for a swim. 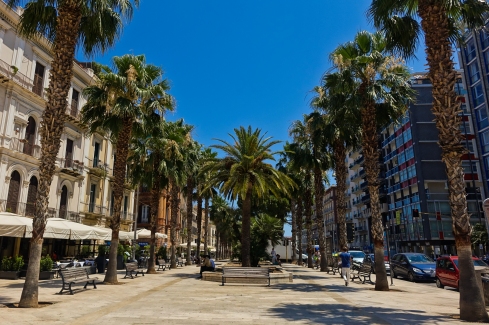 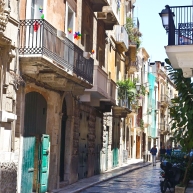 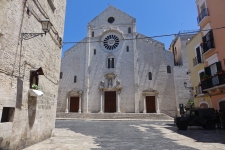 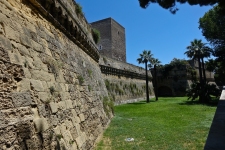 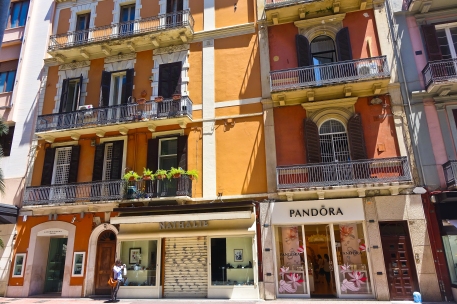 Next….Take a swim break somewhere along the coast where there are large swathes of empty sandy beach.

See that land mass in the distance? Our destination was on the tip of that.

Drive along the coast in Gargano, stopping to take photos! Gargano is a National Park on the spur of Italy’s boot. It’s mountainous and seems mainly covered in trees. 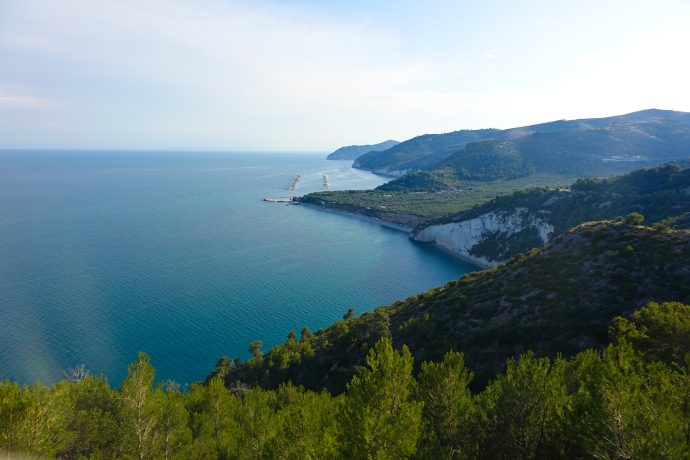 Reach the campsite, Baia a Cala Campi. This was the most professional looking campsite of the lot and there were lots of people there. However, it didn’t seem overcrowded and all in all it was a great campsite in a stunning location. It had a shop, bar and restaurant and a large stretch of private beach. It even had a couple of islands just off shore which we swam to. I still have many tiny little souvenirs from that island in the form of coral embedded in my toes!

Tip: Buy those sort of rubbery shoe things and/ or don’t stand on sharp coral.

Head to Vieste for dinner. I really like Vieste, it’s busy and lively but not overbearing. There are lots of tourist shops selling typical stuff but also some other really interesting shops selling things that are a little bit more unusual. You’ll find some great restaurants high up in the old town overlooking the sea. Follow the signs for the panorama. 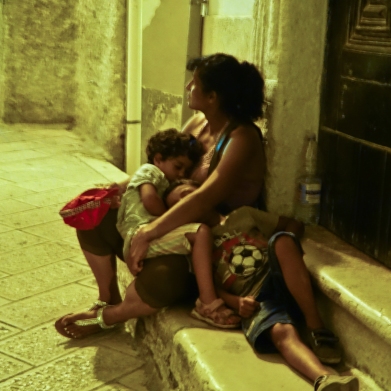 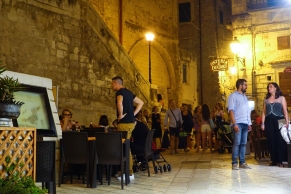 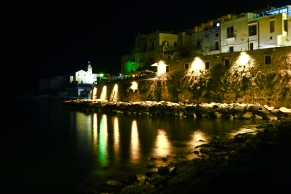 Before leaving Vieste, book a boat trip to the Tremiti Islands for the following day. They leave at about 8.30 in the morning. There aren’t many places that sell tickets. We walked towards the port and bought tickets there.

Tip. They’re a right cunning bunch! Ask exactly what you’re getting for your money. We paid for a tour of the Tremiti Islands (there are 3) which the following day turned out to be just a ferry to one island and didn’t include a tour, unless we wanted to pay an extra 16 euros each (on top of the 22 euros we’d already paid each). Anyway, despite my annoyance it worked out very well in the end as the boat trip there is about 2 hours and we felt a bit “boated” out when we arrived and there was plenty to see and do on the main island anyway.

Day 5: Head to Vieste to catch the boat (and argue with the ticket man).  Relax and chill in the boat for what seems like forever. 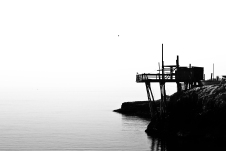 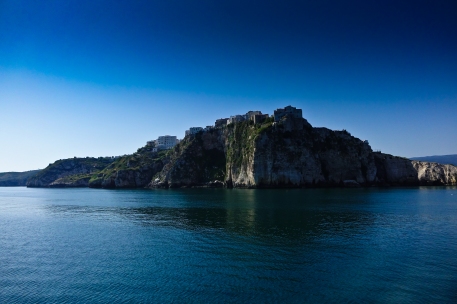 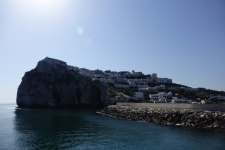 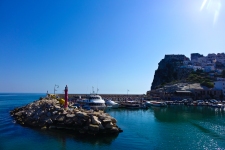 When you arrive, head to the bar at the port in San Domino (where the boat lands, or at least ours did!) Try and capture kids jumping into the water with your camera.

Then explore the island! There’s the Grotta del Sale which is a couple of kilometers walk through a lovely pine forest and a couple of little residential spots. It’s lovely walking through the pine forest with the sounds of the cicadas – the quintessential sounds and smells of summer for me!

Tip: I thought that screeching insect noise were crickets… but they’re cicadas that look nothing like crickets. Did you know some of them live 17 years underground on their own before emerging and dying in a few weeks? And that they are one of the noisiest animals in the world? And that they can permanently damage your hearing if they start making a noise too close by? Fascinating! Read up about them here…

Catch the boat back at around 16.30. Somehow the journey back home seems twice as long as the journey there! I like boat trips but this one seems quite long because there’s such a lot of time in the middle of the sea with nothing to see! 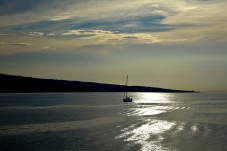 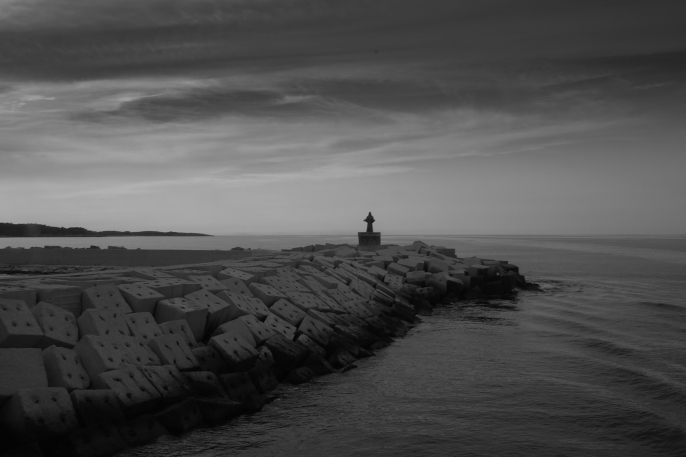 Finally, capture the sunset on the drive back to the campsite. There’s a tower on the way, park there and you’ll see this holey rock face! 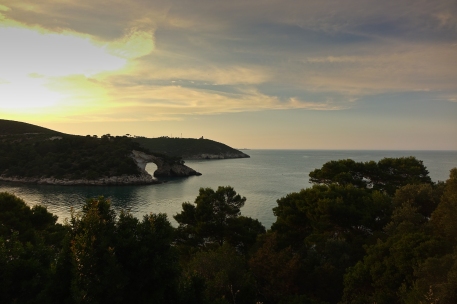 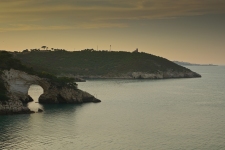 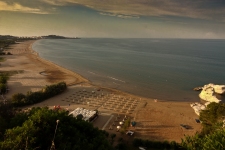 So there we have it – that was my trip to Puglia! Next step…head home!

It really was an amazing holiday and I’d thoroughly recommend visiting those places to all of you- perhaps for a bit longer than I managed!

If you have any questions or want anymore tips about holidaying in the area, drop me a line! 🙂