Well I don’t know where to begin.

Two more earthquakes struck central Italy last week, the last one on the 30th October was much stronger than the first one that struck in August.  Thankfully nobody died directly as a result of that earthquake, but hundreds if not thousands of homes were shaken so much they’re ‘inagibile’ – uninhabitable, leaving thousands without homes. The majority are in the zone of Macerata where I live. The epicentres were only 13 and 20 miles away from Sarnano (my town). The last estimate I read was 30,000 people homeless. Hundreds of those are in Sarnano, sleeping in the sports centre and in their cars surrounding it, away from any buildings that could topple.

I’m very proud of how Sarnano is coping. Despite everything, they’re a strong and resilient lot. We have a massive sports complex just outside of the town centre which is now full of beds and where people can get food. It’s our emergency area now – the base for the fire brigade and the Red Cross and even our ‘comune’ (local government) who are coordinating the salvage efforts. Check out this article and video to see for yourselves (scroll down for pictures). 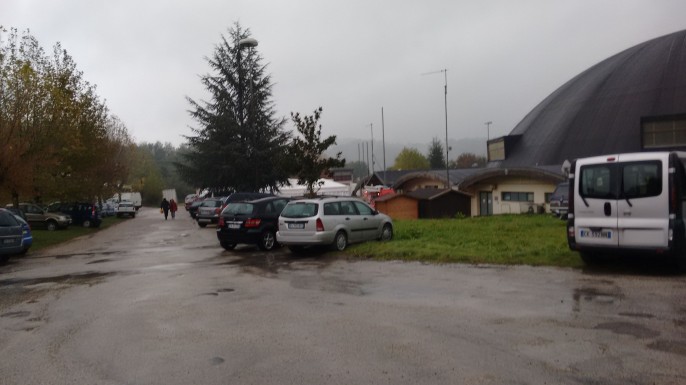 If I think of the number of people without homes, then it really is quite overwhelming but in fact, if you don’t look too closely, outside of the emergency area everything could seem like it was before. In the town centre, bars are open, the market still ran, the shops are open and life continues, though the conversations are somewhat different (“Is your house still standing then?” “Did you hear about x’s place?”). The ‘old town’ has been evacuated not because buildings have collapsed but because the chimneys were falling down and tiles were falling off, bouncing on the guttering and falling onto the streets below.

So to be honest, from an outsider’s perspective it might not seem the disaster that it actually is for our little town. It’s not really until you look closer that you see the extent of the damage and you become aware of other impacts. Driving along the streets, yes, houses are still upright but one in every 5 will have a wall leaning perilously towards the street, no longer attached to the other ones, or a corner of the building which is coming away, or a roof that’s caved in.

My home is one of those. Although still standing the walls are cracked all the way through so it looks like a road map. Walls are bulging and in one place, just sort of bent out of shape entirely. All the ceilings and walls seem to be coming apart from everything else. On a more superficial level, glass and ceramic tiles cover the floors and there’s barely a thing still on the walls. A lot of my art projects completed over the years have smashed. I don’t think the house is in danger of imminent collapse however, as long as there’s not another large tremor. But alas, there are tremors all day everyday and it seems like there will need to be at least one other large quake in order to reduce the stress built up on the fault line from what I understand from the people that know about these things.

The rest of my hamlet is badly damaged too. The roof caved in on the house opposite and it’s covered in serious cracks. Hopefully it can be reinforced but meanwhile, the owner is devastated – her granddad was born in that house. The house next to it has a corner that is balancing in place, no longer attached to the rest of the house. The other three houses in my building are uninhabitable too. Although my next door neighbours place is fine he doesn’t feel comfortable coming to visit his house (a holiday home) given that mine will fall onto his if it goes down. Another neighbour’s place is also uninhabitable with serious cracks running through it. There are 9 houses in my hamlet in total and six are currently uninhabitable.

I was in England when the last two quakes struck so in one sense, I’m thankful I didn’t have to go through the terror of the quake but equally sad that everyone else did.  The tremors never really stopped after the first quake in August, though they did calm down a lot. I always slept with shoes by my bed and a torch, just in case, with my usual cluttered house messy apart from a clear exit route. Even in the UK, my heart would miss a beat when large lorries would go past, rattling the house a bit. In fact, this ‘earthquake readiness’ is considered one of the factors that saved people’s lives – at the first sign of danger, you’re ready to get out but the constant ‘readiness’ takes its toll. Not wishing to sound too dramatic but people are literally broken-hearted; one Sarnanese woman died of a heart attack after enduring a night of constant tremors in her car outside the sports centre and that sadly wasn’t a one off.

But it’s not just people’s homes that have been impacted, or their spirits, there’s lots of other hidden issues that you’d never even think about. For instance, Italian’s often keep their elderly parents in their homes looked after by a carer. The carers are almost entirely foreign. Dozens of carers in Sarnano have gone back to their own country understandably but it’s left the town’s elderly high and dry. Homes for the elderly are all full to the brim.

The next step is for the structural engineers to come around and officially declare houses habitable or uninhabitable. Mine will be uninhabitable. Who knows whether it can be fixed or rather whether it’s worth spending the money to fix it? Some say that it’ll need to be knocked down; others think that it could be reinforced. Whatever the case, as it’s my primary residence the government should pay for the work but it’ll undoubtedly take years.

Meanwhile, I’ve been overwhelmed by the support of friends and family through all this and even people I barely know who have offered to help. The cat and I are now staying in a friend’s apartment in Ripatransone, a town not too far from the coast, still in Le Marche but further away from the danger zone. I’ve landed on my feet. The apartment is lovely and in a very pretty part of Le Marche that I’ve not really explored yet. I might be able to stay here for a while, though everything is still so up in the air. But it’s not my home and it’s heart-breaking to think I may never chill out on my terrace trying to spot wild boar or deer again or spend my evenings experimenting with what I can cook on my stufa.

So, in summary, it’s been horrible for everyone and continues to be a struggle but “ce la faremmo”, we’ll make it.

25 thoughts on “Life after earthquakes…”