My new favourite place, visitors and an ant infestation…

How is everyone? I’ve had a string of visits! My parents, Pane Caldo’s parents and my brother and sister-in-law all came over from the UK. It’s been lovely to have people from home here and it seems a bit quiet now they’ve gone, though the next set of visitors are out in July so not too much time to feel lonely! It’s been really good to do something other than house related activities too and see some local sights that I’d not been to before. Firstly though…

A couple of weeks ago marked the 750th anniversary of Sarnano being an independent comune so the Sarnanese celebrated in style over the weekend. Alas, I missed a few of the celebrations but I’m pleased to say that I made it to see our local celebrity band, La Racchia. Along with more traditional instruments, their party trick is to play various household items like colanders, drainpipes and toilet cisterns. And what band would be complete without the customary colourfully dressed band leader with a dummy in his mouth wielding a wooden spoon? 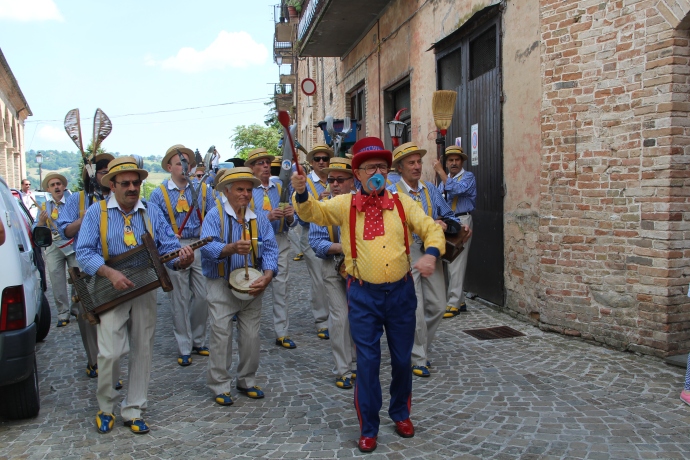 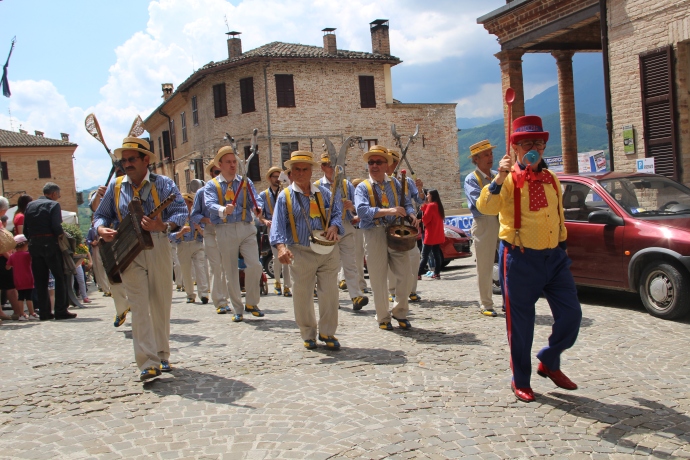 In no particularly order, these are a few pics from the last two or three weeks of sightseeing around the area… 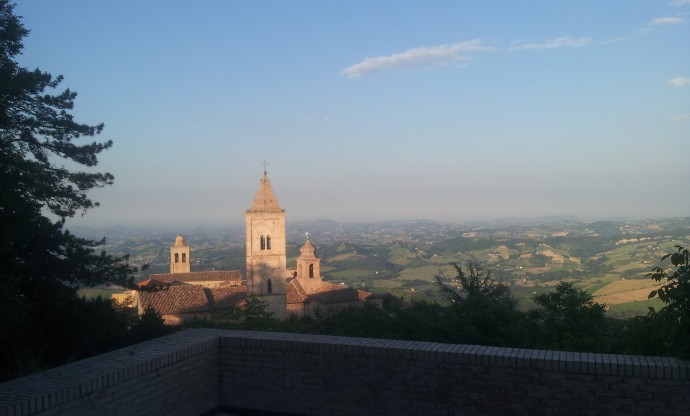 Penna: Beautiful hill top town just a few minutes away with a little park at the top and amazing views across Le Marche. 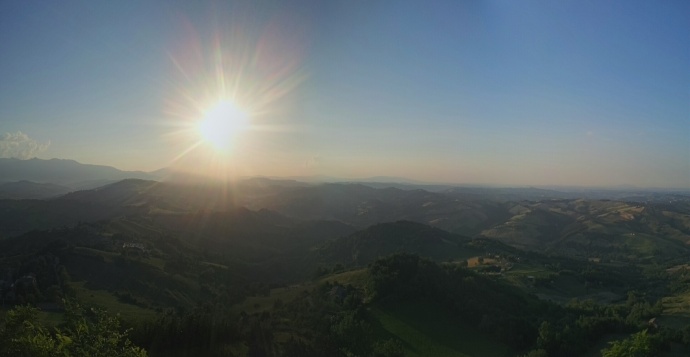 View from the top of Penna at sunset 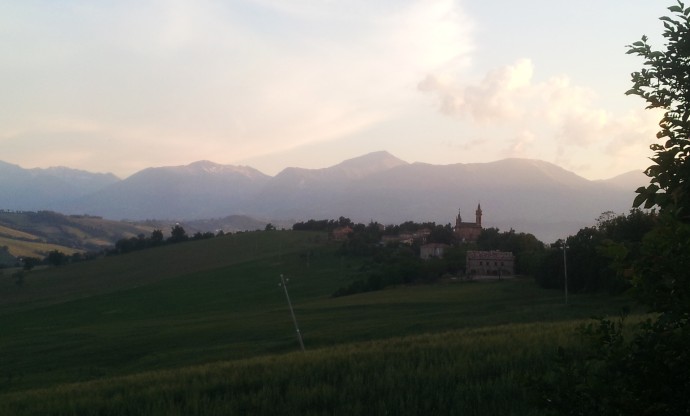 This was on the way back to Sarnano from Penna. 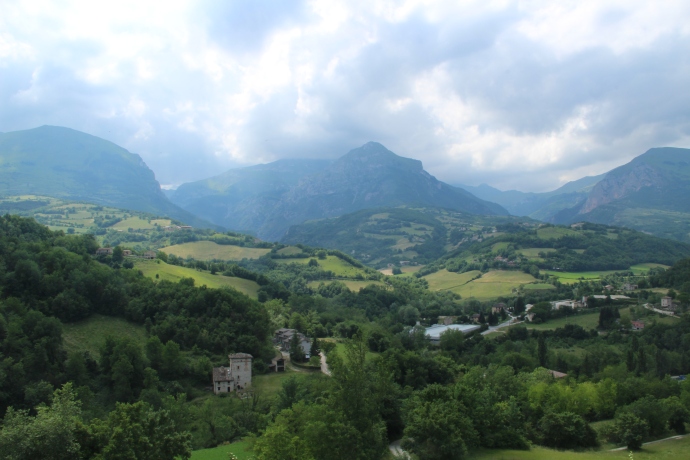 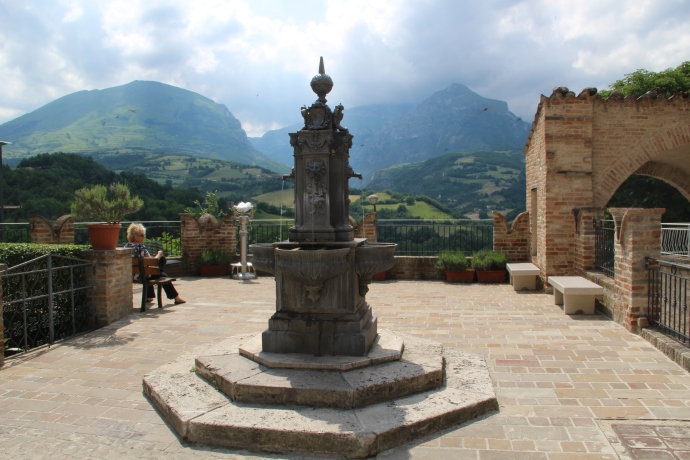 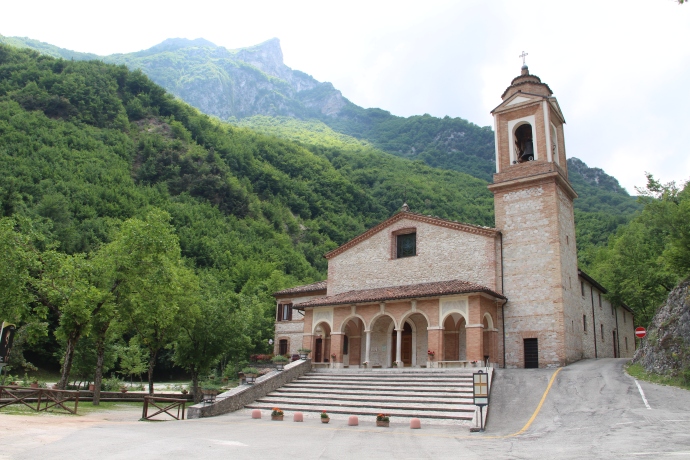 Madonna dell’Ambro nestled in the mountains 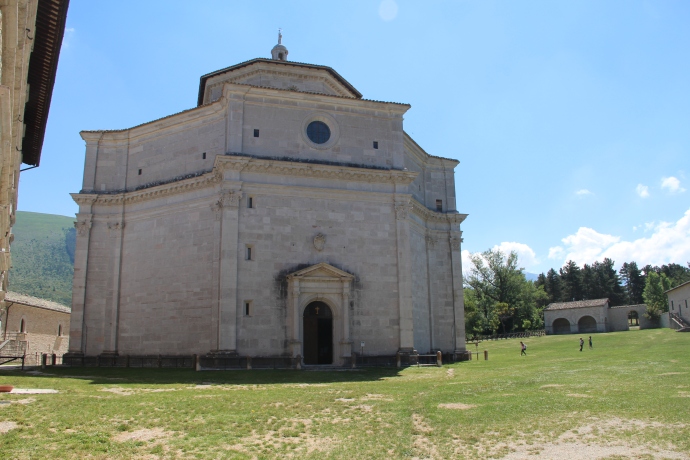 This is the Santuario di Macereto near Visso 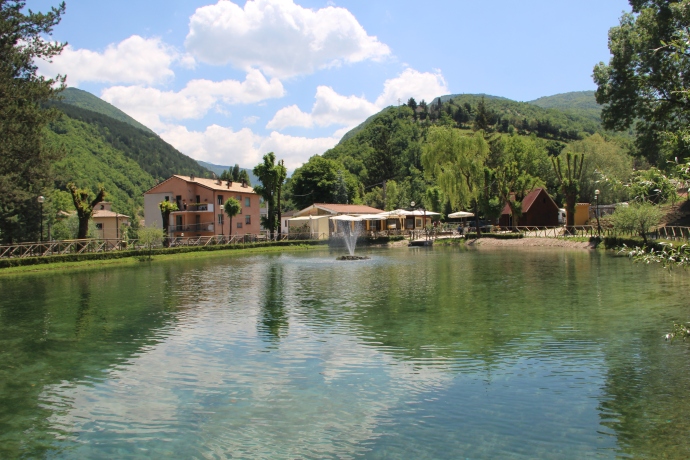 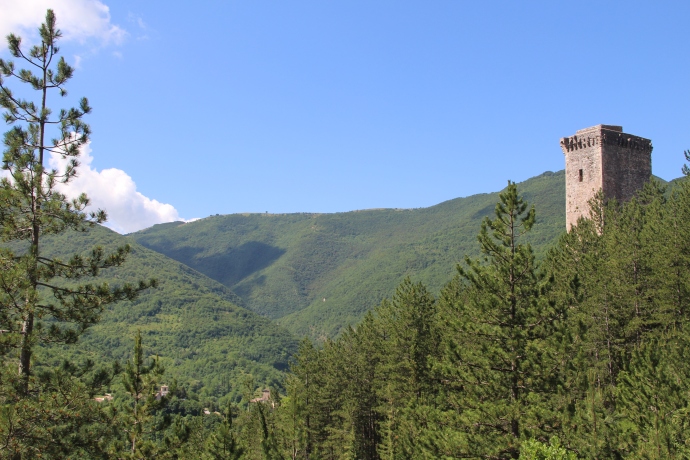 Castle in Visso – only the ruins remain but you can walk up to them for a good view. We went on a little round trip from the town. Mind the snakes! 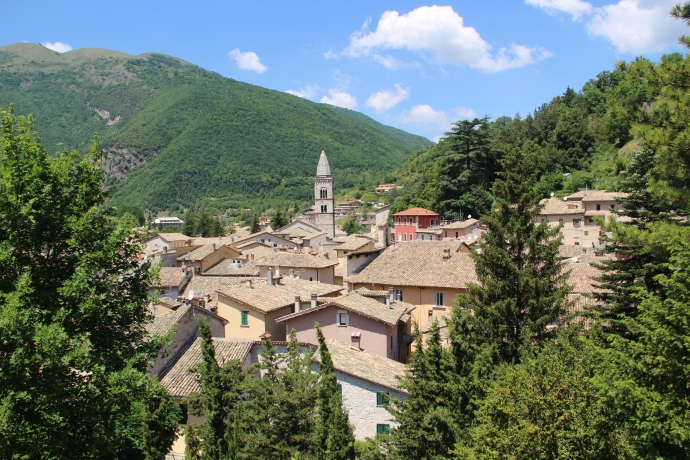 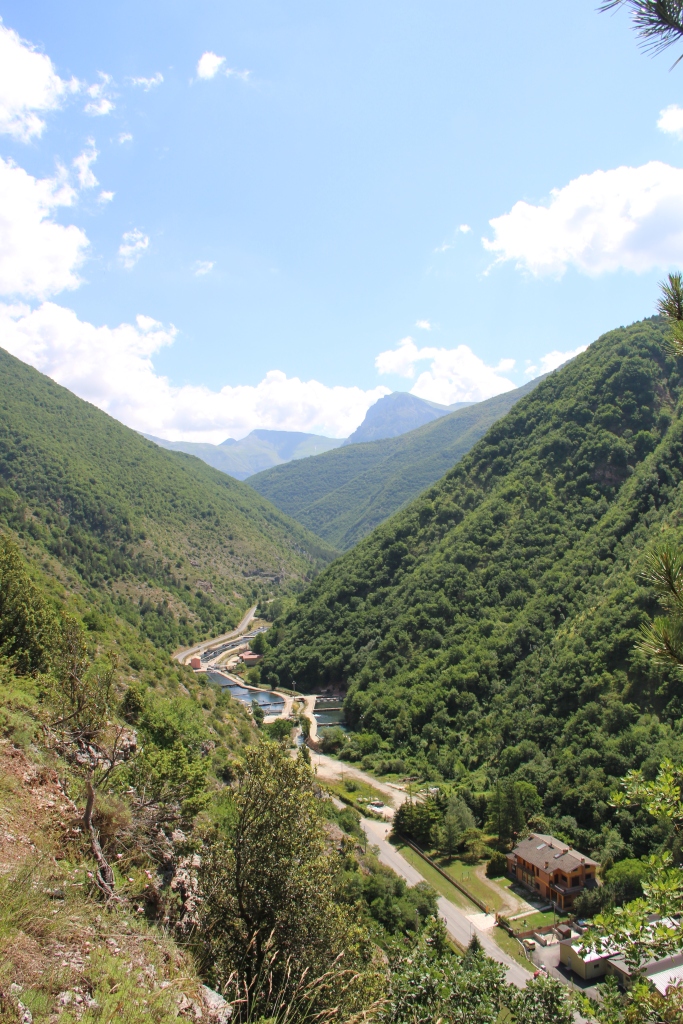 There’s quite a few trout farms in the mountains it seems – at the base of this valley in Visso is one of them. 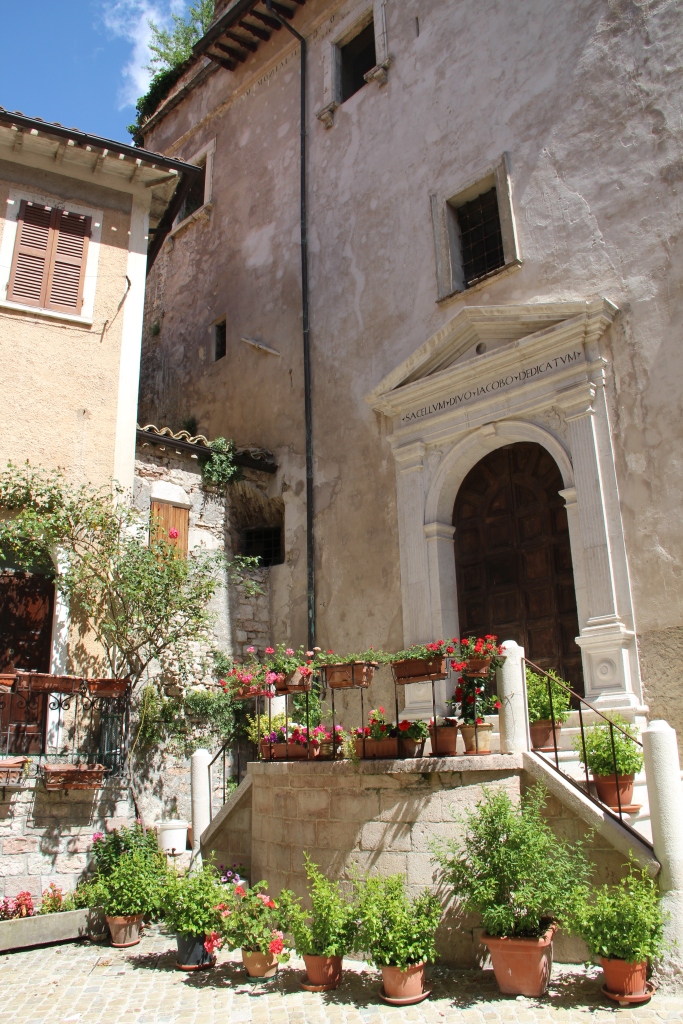 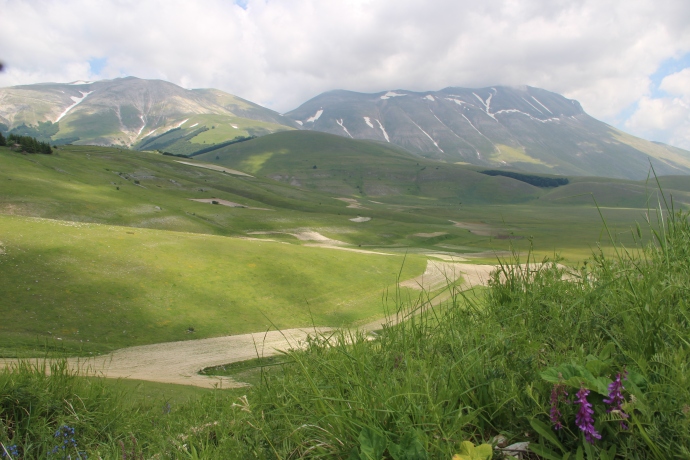 This is near Casteluccio, my new favourite place.

At Casteluccio there’s piano grande – a massive field of cultivated flowers. It’s not quite ready yet but the flowers should be out in the next month or so. 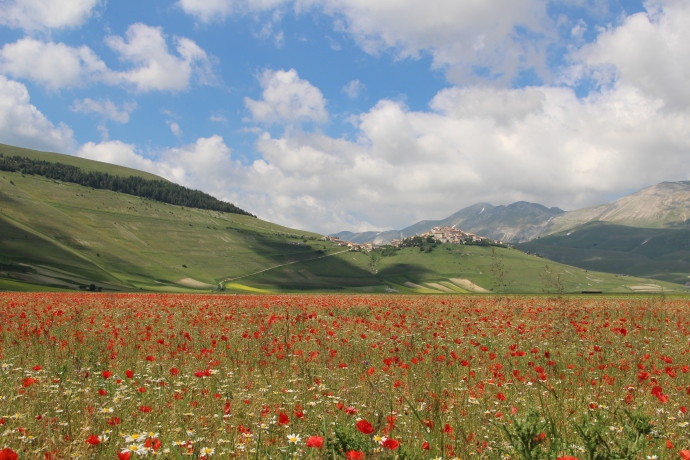 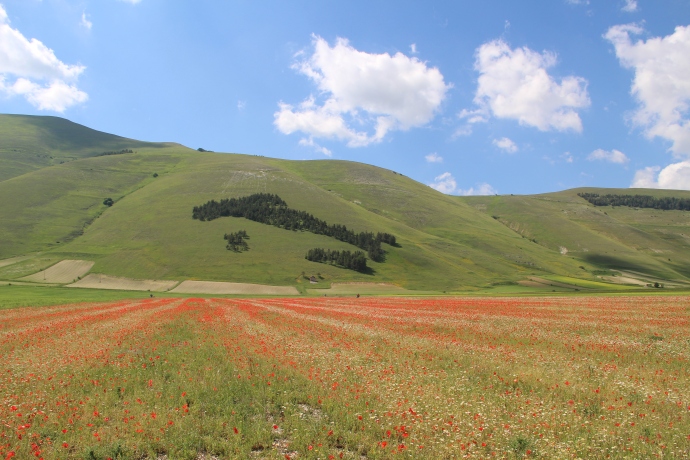 They even had a little wood in the shape of Italy! 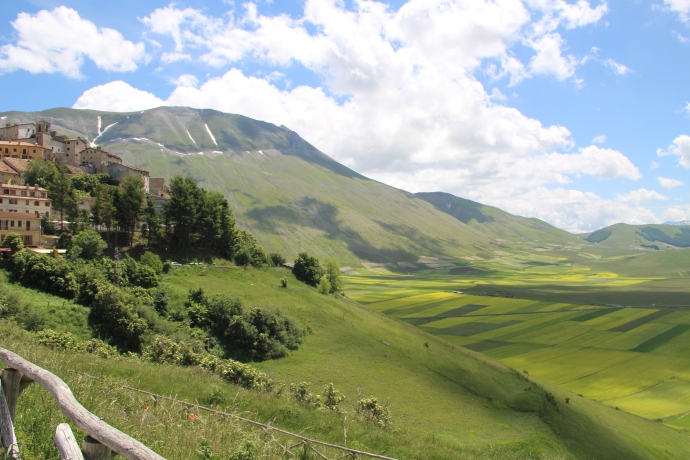 Casteluccio closer up. As you can see, I like Casteluccio! This is the last picture, I promise. 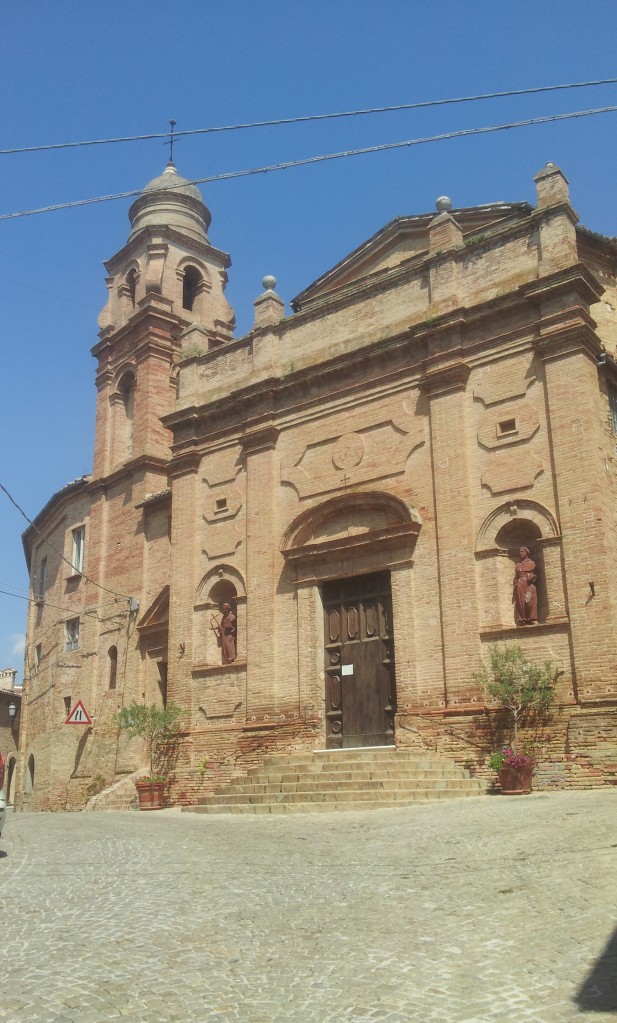 I also went to check out Treia – you guessed it, a hill top town! This is one of the churches. 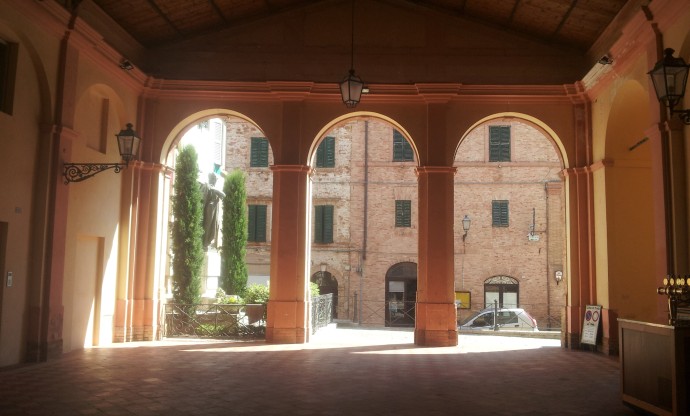 And this is taken from just by the main square where last weekend they were holding a ravioli festival! 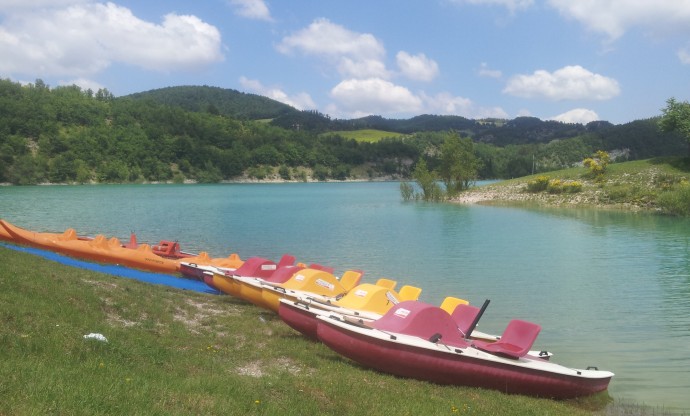 This is Lago di Fiastra. The ginestra (broom) is out at the moment so it’s looking very colourful. 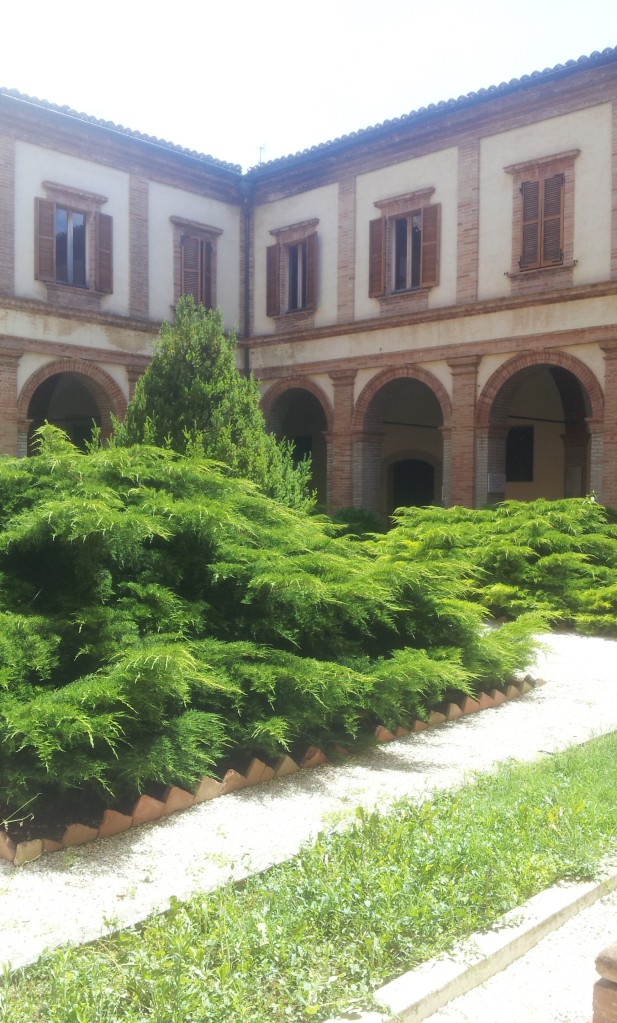 This is a little cloister in San Ginesio. San Ginesio is definitely worth a visit – it’s known as the “Balcony of the Sibillini Mountains” and for a good reason. There’s a nice restaurant called Terra Nostra in the piazza which looks fairly small from the outside but is larger when you get inside, is nicely decorated and has nice food. And we got a free limoncello so that’s always a bonus. 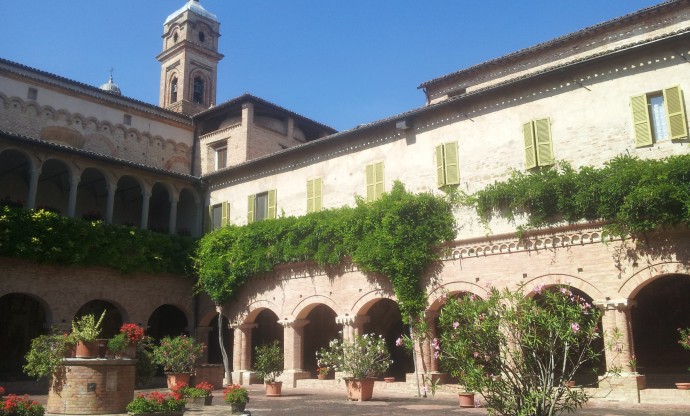 And this is the cloister at Tolentino outside the Basilica di San Nicola. 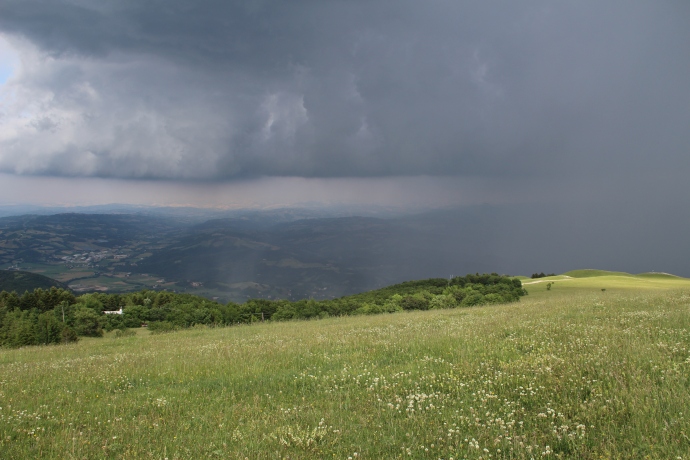 Sarnano has been a bit thunderstormy lately and mid mountain visit we saw this one approaching! 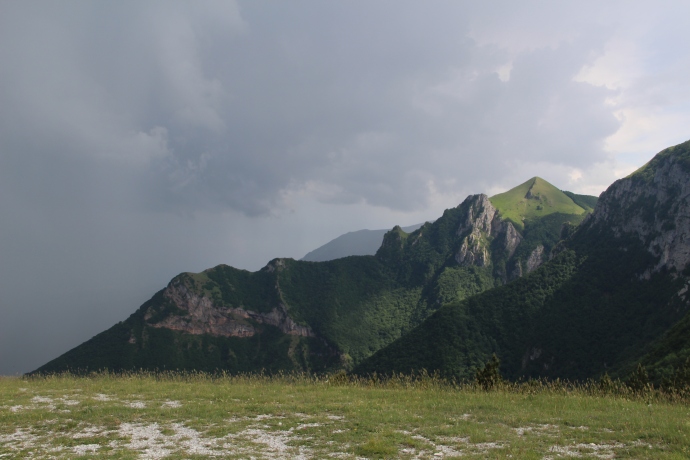 This was taken near me in Sarnano, looking very dramatic with the approaching storm.

I think the visits all pretty much went without a hitch apart from the last night with my brother and sister-in-law. When we first moved here myself and Pane Caldo tried a restaurant that was recommended to us by our old landlord. It’s called Scherzi a Parte. It’s brilliant – lovely food, great location, fab service. As a result, we’ve been going there ever since and taking all our visitors there. With any visitors that come back, they’ve been keen to go back to the same restaurant. But there are OTHER restaurants!!! What if we’ve all been missing an even better restaurant?!?!?! So, I thought I’d take the opportunity to go somewhere new with my brother and sister-in-law, a place recommended to me on a couple of occasions. It was a terrible mistake!!! The decor was like something straight out of the 1970’s. The pasta was dry and hard – not even al dente but like it was made the day before and heated up. Terrified of offending anyone we tried our best to eat our meals but the pasta didn’t diminish, only multiplied before our very eyes. We’d still got a large selection of anti-pasta to work our way through too. As typical English folk, it’s just inconceivable for an entire table to order starters and main courses and leave almost everything. Oh the embarrassment, the shame…….until I remembered I had two plastic bags in my handbag. Our moods shifted as we stuffed the bulk of our food into the bags. My sister-in-law refused to lower herself to that but she’d done a better job of eating her food than we had so fair enough. I did feel slightly guilty when the waitress came over later and chastised her for leaving more food than we had! Anyway. Scherzi a Parte next time it is.

It’s been a while since Animal Watch and goodness me, there’s been some unwelcome ones! My bedroom, bathroom and terrace have been somewhat overrun with ants. I’ve had to become a specialist in ant elimination which is really not something that I’m proud of being an animal-loving vegetarian! Anyway, I seem to have resolved the issue (bicarbonate of soda and sugar seems to do the trick. Poor ants).

The next intriguing development has been fireflies – I’ve never seen fireflies before but they’ve suddenly appeared at night. Apparently it marks the start of summer so that’s good! I managed to catch one in a jar for a closer look but it promptly stopped lighting up as if in protest. It was released shortly thereafter. They only live a day or so anyway poor things.

My favourite animal update though are the kittens. I’ve been trying not to get attached because last year’s litter all died apart from my Batfink. However, they’re all doing really well, although three of the five are still really tiny. Those ones belong to Batfink’s mum so I’m sort of encouraged that at least he did quite well! (The other two have a different Mum). I’ll put in a photo next time!

I think that about sums up the last few weeks. I’ve been doing a bit of DIY as usual but I’ll update on that in the next post.

Have good week’s all 🙂

8 thoughts on “My new favourite place, visitors and an ant infestation…”