Sicily and other exciting updates!

I hope you’re all hunky-dory. I have lots of news! I’ll start with my trip to Sicily…

I travelled with my fellow blogger friend, Gina who organises trips to Italy – check her out on Facebook and Instagram. We only had a week and didn’t want to spread ourselves too thin so we concentrated on investigated the east and south coast. It definitely warrants a return trip to see all the areas that we missed. It was good to go in the winter when there were fewer tourists (I realise I’m a tourist but it doesn’t quell my dislike of mass invasions of other tourists!). The obvious downside of going in winter is the weather which generally treated us well for the first 4 or 5 days but was pretty grim the last couple of days. Another downside of winter travelling was I had a ghastly cold for the entire duration of the trip which impacted my energy levels somewhat! We still managed to get quite a bit done though starting off in…

Catania.  I was pleasantly surprised by Catania. It’s a nice lively city with massive markets (in particular the fish market is worth a look for those that like seafood). Gina said the seafood in Sicily was amazing – it was certainly fresh. In fact, most of the stuff we saw was still trying to crawl back to the sea. 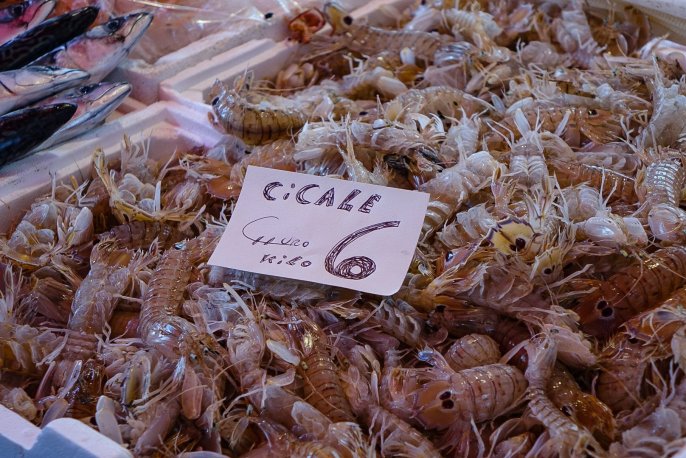 … and lots of open spaces and a nice park…. 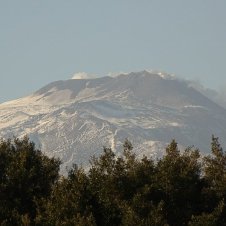 And from here you can see Mount Etna looming over the city from a distance. 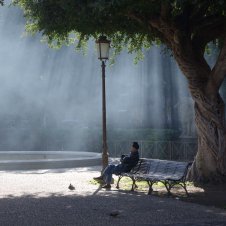 …and the duomo (cathedral) and surrounding area was very impressive…

… and lastly it’s worth popping over to see the Monastery if you get time. The staircases  look like they’re straight out of an Escher picture. 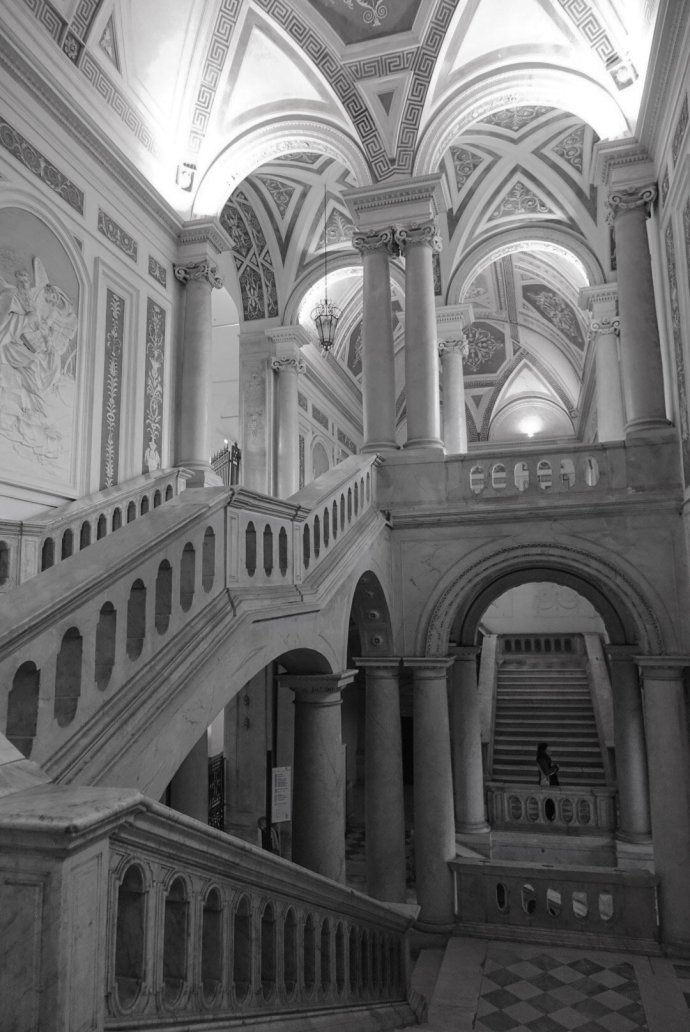 The next day we went to Taormina which is north of Catania. We went by train which took about 45 minutes and then from the station took a bus to the town of Taormina itself which is perched on the top of a hill.

Taormina is a pretty little town with some great views over the coast. It’s full of expensive designer brand shops, not your usual tourist tat at all.

One of my favourite things to see in Taormina was the ‘Teatro Antico’, the ancient theatre, which has to surely be the best positioned theatre in the entire world.

You can get the Funivia (cable car) from Taormina back down to the coast where you can walk to Isola Bella which is a very cute little ‘island’ that you can walk to/swim to depending on the tide. When we were there the water was just a bit too high so we didn’t brave it!

This is my friend Gina standing by the “crossing”

The following day we hired a car from Catania airport to travel to our next location via Syracuse. We drove around Syracuse for a while trying to work out where we were supposed to go – we’d both heard it’s very pretty but when you enter the town, to all intents and purposes it just seems to be apartment blocks and shops. After a while we came to the realisation that it was only a particular part of Syracuse that people spoke about, the island of Ortygia. Well…… Ortygia really is very pretty. 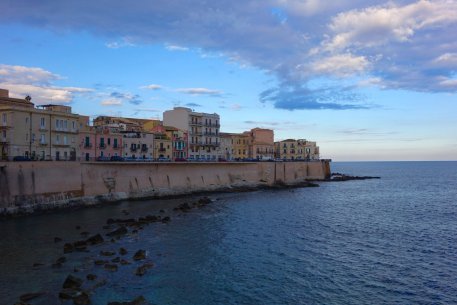 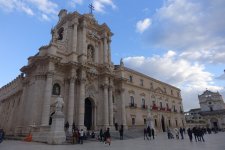 That evening we arrived in Ragusa. I like Ragusa. Our hotel was in the old part of the town, Ragusa Inferiore (as opposed to Ragusa Superiore – related only to its height as opposed to the people in the latter being particularly snobbish!). The new part was built following a huge earthquake (7.4 magnitude – the strongest in Italian recorded history) that destroyed the old part in 1693 that killed 5000 residents.  The earthquake had a massive impact everywhere in the south / west of the island with almost two thirds of the residents in Catania killed. A total of 60,000 people were killed in total. It’s difficult to imagine the devastation to all the towns and villages there. As a result buildings were rebuilt in the style of the time so there’s a lot of Baroque style buildings in Ragusa. My photos are somewhat lacking in Ragusa because it was mostly torrential rain whilst we were there. We made the most of the rain though by visiting the local spa, Spatium which I thoroughly recommend if like us, you’re somewhat rained in! 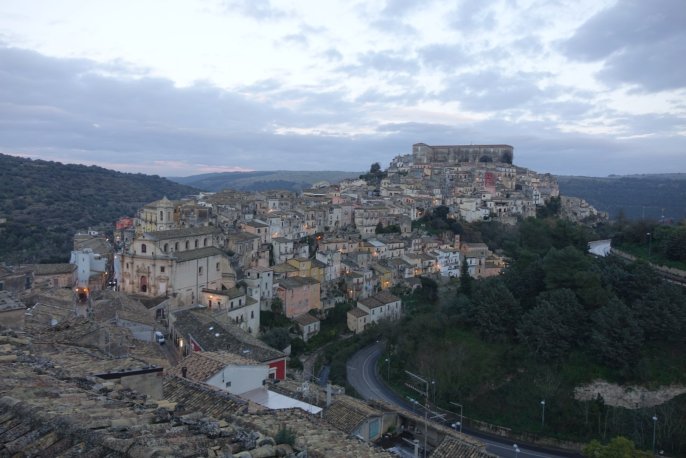 In the morning we drove to Noto. Noto reminds me a bit of Bath in Somerset, England as the buildings here were a similar pinky/yellow shade of sandstone. It had some very grand buildings for what felt like quite a small little town.

On the way back to our hotel in Ragusa we made a flying visit to Modica only really to stop at the viewpoint. 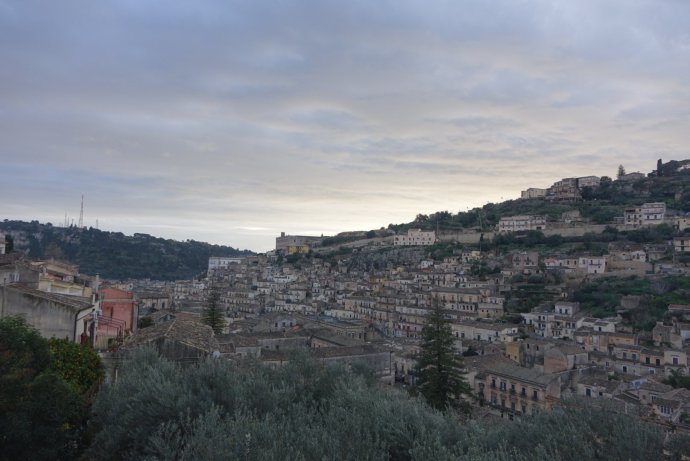 The next morning we drove to Agrigento. Agrigento is known for it’s Valle dei Templi (Valley of the Temples). It really was very impressive and makes you wonder what it was like living back in those days. We stayed in a lovely apartment where the owner gave us some good tips of where to go and what to see. One of the tips was to go to the Valley of the Temples in the evening so you can get some good photos at sunset and when it gets dark the ruins are all spectacularly lit up. 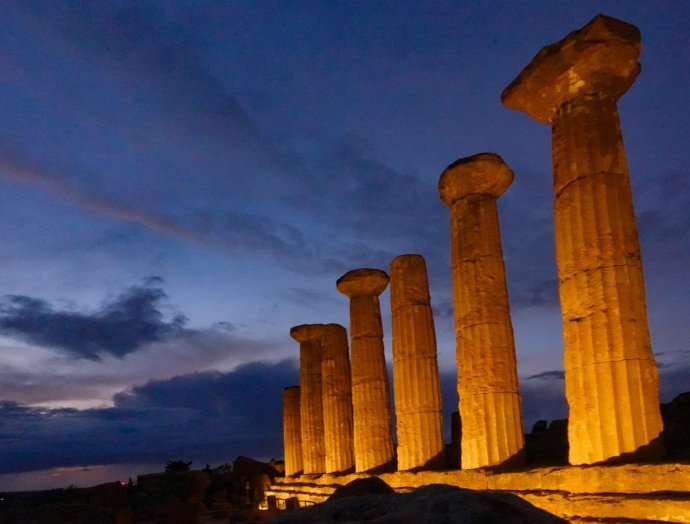 The next day we drove to the Scala dei Turchi (the stair of the Turks) so called apparently because the rock resembles a staircase and they used to get frequently raided by the Moors. The ‘stairs’ were actually cordoned off but, you know, it’s Italy and rules are regarded as more of a guidance so the fence had been destroyed in parts to allow for the influx of tourists. To be fair, I can imagine the ‘stairs’ becoming more like a ‘sliding death trap’ so I can see the authority’s point of view.

On our last day we headed back to Catania via Piazza Armerina. We’d heard this was a good place to visit but hadn’t done much research into it. We should have! We went straight to the town but we should have gone to the Villa Romana del Casale which is nearby and home to some impressively preserved roman mosaics. Alas by the time we’d been stuck in traffic for ages, been led by my evil sat nav into roads just big enough to squeeze the car into if you put the mirrors in, got completely sodden by torrential rain and a near-death experience coughing fit on my part (I think I actually had man-flu), we decided to just head back to Catania early for the flight.  We found an outlet shopping mall on the way with brands so designer that I didn’t even know who most of them were.  I think Sicilians like to keep up their image!

I was quite impressed at just how much the landscape varied across the areas where we visited. Sicily is a lot greener and lush than I imagined it would be, perhaps that’s because of the time of year.  Around Syracuse and Noto you might be forgiven for thinking you’re in England’s Lake District with all the dry stone walls and livestock (cows instead of sheep though). Further towards the coast the countryside is much dryer looking, covered in ‘Fichi d’india’ (prickly pear cacti) and there are greenhouses as far as the eye can see. Further inland again, around Piazza Armerina and towards Catania the landscape reminded me of Scotland. Unfortunately though, I’ve never seen so much rubbish at the sides of the road. It really was a bit shocking and a big shame as it really did take the edge off the landscape.

Driving in Sicily is much like driving in Naples but with marginally fewer people launching themselves into the path of your moving car. Like Naples, there are practically no road markings, very confusing and it’s impossible to know who has right of way, at any point, ever. I’ve decided that one should approach driving in these places like walking across a busy piazza (albeit with a potentially lethal one), there’s no right or wrong way of doing it and you just need to stick to your guns and be decisive about it (and have some hand gestures up your sleeves in the event of emergencies).

So that’s Sicily. My other big news is that I’ve finally been allocated my very own apartment in Sarnano until my house is rebuilt after the 2016 earthquake. It’s exciting. It’ll be nice to have my own place and I really do miss Sarnano and the things I did there but likewise, I’ve built a life around this area now and I do love the house that my friends have been so kind to let me stay in for the last couple of years. It does feel a bit like I’m having to constantly go back to square one! Anyway, as Winnie the Pooh once said, “how lucky I am to have something that makes saying goodbye so hard”!

I’ll update on progress! I hope you all have a good week or two 🙂