I’ve been waitressing this weekend for the Rosso Conero festival in Camerano. Let me tell you – waiters and waitresses should get 100x more money than people that work in offices if they have anything like the experience I had last night! I was working for Angeli di Varano, a local cantina who had teamed up with a well known chef to offer a fancy 4 course meal. I was on clearing table duty. I had to learn some new words. “Lay the table” sounds a lot like “hairdressers” in Italian. For a while, I thought we had to serve an influx of hairdressers. I’m back on again tonight as well… 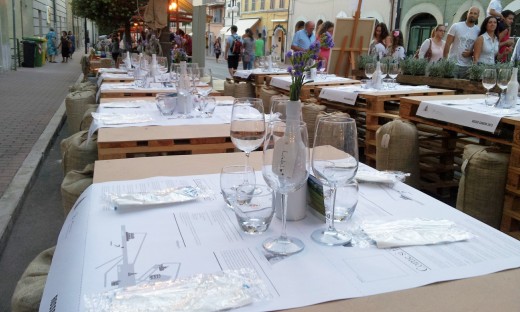 Rosso Conero Festival runs for 3 days from Friday to Sunday. Thankfully I was only working two of the days – it’s the oddest wine festival I’ve been too. In fact, I think “wine festival” is misleading. There’s a place you can buy a glass and then there appeared to be about 3 tiny stalls where you could chose from an incredibly limited selection of wine. No free tastings! I’ve only ever been to wine / beer festivals in London where you buy / put a deposit down on a glass and then spend the entire day visiting 100’s of stalls getting free samples. A more accurate description of the event would have been “Cool art, music and other random stuff festival – oh, and you can buy a bit of alcohol if you want”.

One of the bands that were playing in Piazza Roma – they were a good laugh, very engaging!

Piazza Roma at about midnight on Friday!

Other stuff this week – I had a business discussion with Marco (from the Language School) on Monday to discuss recruiting more students from the UK and teaching English to Italians so I’m putting together some proposals this week on that front. It’s been quite good engaging the brain on things other than what shall I eat today!

Continuing on with the “working” theme, this week’s English lesson with the Italian girls was actually fun! I printed out a couple of articles from BBC news – difficult ones it turns out and got them to read them out as “newsreaders”. English is difficult to pronounce for foreigners – we don’t pronounce words as they’re written – putting on a phoney newsreader voice seems to help for some reason. And then we spent the rest of the lesson playing “Taboo”/ “Articulate” – I prepared some cards with some of the words from the articles and they had to describe the words without using the word itself or miming so the other person could guess. That was amusing. On reflection, I think including “torture” and “immune system” was harsh 🙂

I finished my Italian Exercise book – I’m on the next level up now. Woohoo! And I’ve been doing “combined pronouns” this week (which I think are probably right up there with “rocket science” in terms of difficulty) and occasionally, OCCASIONALLY, I get them right.

Oh and I’ve got some bureaucracy done! What a productive sounding blog update this is. It feels like months have past since Monday for some reason. Anyway, I managed to buy health insurance and then, THEN, I did something at the Comune. I don’t entirely know what. I think what I’ve succeeded in doing is declaring that I live in Camerano. It seems odd to need so much stuff to declare that I live here. I had to get Marco to complete a form say that he’s letting me stay in the flat and now I’m waiting for the police to come and visit to double check. Obviously there would be serious consequences indeed if they didn’t know who was living where. I mean, imagine…someone could be living somewhere and if the comune didn’t know, then it would be bad because of the er….. because of the erm….. yeah, I don’t know why. Anyway, I don’t know if declaring that I’m a resident here is the same as this “carta di residenza” mythical beast – I don’t think so because I don’t get a card. Only a letter. Which I might frame if it does actually come through.

What else? Ah my neighbour popped around with a care package of stuffed tomatoes – very tasty. There’s a festival coming up in Jesi in the next couple of weeks – I think I’m going to that with him and will be helping with his grape harvest in his field nearby too. Goodness – look at that – more productivity. I’m on form!

What’s a bit odd? I don’t know whether this one applies generally to all people or not or just me but something strange has happened. I’ve never been able to make a proper omelette before – I turns into scrambled eggs to matter what I do. However, since arriving in this country, without changing my method in the slightest, I’ve nailed omelette making! So. Disappointed with your omelettes coming out scrambled? Come to Italy!

My omelette – it looks like an omelette and everything! Spinach, tomato and cheese. Mmmm.

Right, that’s about it. Short update this week (I bet you’re all breathing a sigh of relief ;-)) – all this productivity has taken it out of me!