I’m so pleased to be here! This week’s been great – lots of interesting things to do, lots of laughing and lots of relaxation.

I went to San Michele beach on Monday with a friend and spent most of the day there – we splashed out on umbrellas which is something I never do. The beaches here aren’t like in the UK where you can basically go wherever you want – people here own bits of beach and they set out umbrellas and sun loungers which you need to pay for. For the whole day it was 6.50 Euros. I’ve decided that’s a bargain given the reduced chance of skin cancer! I might do that more often, despite my underlying dislike of these private beaches (it just doesn’t seem right for people to be able to own such lovely bits of land!).

San Michele beach – busy even on a Monday

I went on a blackberry picking mission last week after seeing loads in the countryside the weekend before. I hadn’t wanted to look too closely because I was annoyed I’d not brought any bags. So, laden with tuperware and bags, I headed out on Wednesday. Alas, I picked about 40 – they were all small apart from the ones that were hovering over hidden ditches (it turns out), too high to reach or protected by a particularly nasty looking creepy crawly. I’m not cut out for the countryside really, particularly blackberry picking – I spend an inordinate amount of time screaming. You should have seen one of the spiders that dropped down in front of my face whilst picking blackberries. It was more like a giant crab. And look at this Web of Horror below…! I if I was an insect and got stuck in this thing, I think I’d die on the spot. If you look closely, you can see a creepy horrible leg sticking out in a creepy horrible fashion <shudder>.

And these webs are BIG too… 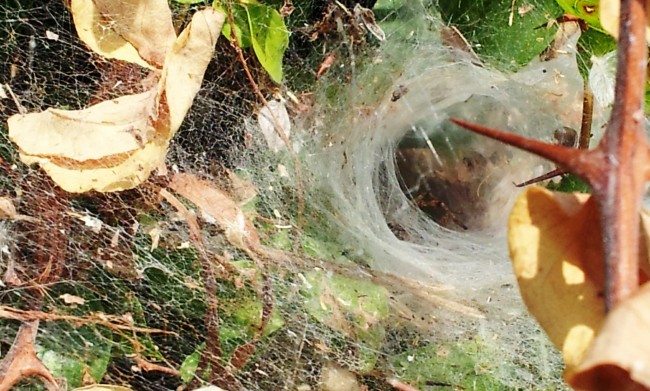 Can you see the creepy horrible leg?!

I’ve found a shorter round walking trip that starts from my house. My parents are going to come out in a couple of months so I’ve been trying to find a nice local parent-friendly walk.

On Thursday I went out with some friends to a Piadineria (a place where you get piadinas – the Italian filled flat breads that I tried last week) called “El Merendero” in a village/town called Marotta which is close to Senigallia. They make lovely piadinas but you can’t book. We ended up waiting an hour for a table and finally sat down to eat about 10pm, and then it took a good while to be served so by the time we actually ate, I could have eaten a horse (but that’s in the next region up…).

Then we headed to a bar, “Essentia di Mare” in a village/town called Marzocca, also near Senigallia where they played latin music and there was a couple of dance floors. I had a ball! It’s the first time I’ve danced anywhere apart from my kitchen for months. One of the Italian guys we were with asked me to dance – I don’t think the poor guy expected me to be quite so inept and spend the entire time laughing. And they had these group dance sessions – they were hilarious too (for me at least). It was a lot of fun.

View onto the dancefloor

On Friday I went on an art course evening with an artist that has a studio in the piazza. There were three of us altogether – the teacher, me and another girl – both a similar age to me so it was a really lovely couple of hours. We headed to behind one of the local agriturismo’s where they have a stable and set up our easels there – we didn’t paint – we had blocks of clay which we worked to represent the scene in front of us. That was something new for me so I was pleased about that! Mine has split in two now – I think it dried too quickly but it was a really good experience and very relaxing to be out in the countryside doing arty stuff. I’m going to try and get an easel soon so I can head out and do a similar thing myself. 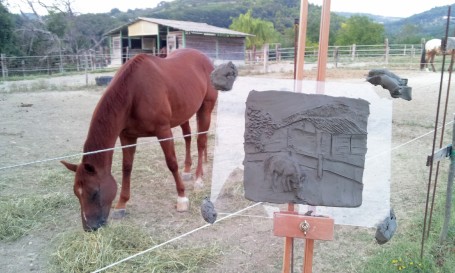 My attempt and the background – I should have taken a picture earlier on in the evening because it looks a bit gloomy here. In actual fact, it was glorious weather…

The Camerano festival has started. I’m just so impressed with our little town! They’ve been making such a lot of effort – the whole town is decorated with ribbons and fabric for this “Festa Del Patrono” which started in earnest yesterday. The opening event was in Piazza Roma (the centre of Camerano) where they had  a “Spettacolo Spettacolare” – a tongue twister if ever there was one – basically, a spectacular spectacle which in this instance was a sort of parade of drummers, dancers, fire breathers, roman gods (or people dressed as them at least), kids with ribbons and pompom things. I haven’t seen so many people in one place since I’ve been here. I thought I’d treat myself to a glass of wine and on being asked if I’d like a small or a large glass, I opted for large based on in England a small glass being akin to a thimble. In fact, a large glass is a very large glass here though – a pint! I’ve never had a pint of wine before! Perhaps we’ve been missing a trick in the UK. And it was only 2 Euros. So, I found a good spot in the piazza, sipped my pint of wine and watched the spectacular spectacle, which was, well, I think, spectacular! 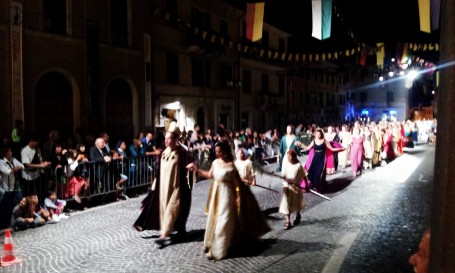 Part of the procession…

Rumour has it, my Italian has got er, audibly better. I think this is thanks to 3 things:

It’s been a while since Lizard Watch – and I’ve recently discovered a new type of cutie little dark green lizard so to combine with this week’s “What’s a bit odd” – here’s a picture of Super Lizard. He looks like he flies. I don’t think he actually does. Cute, cute, cute. 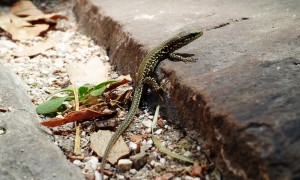 I think this is my favourite lizard shot. He looks like he’s flying.

Hope you all have good weeks.