How is everyone? It’s been a busy month or so here and yet another mixed bag.

To get the bad news over and done with first, there’s been yet another loss in my family, another Uncle. He used to read all my blog posts and keep tabs on me from afar and I shall miss him greatly. I think one of the biggest challenges to being an ex-pat is when things like this happen. Living in another country away from your family is difficult – grieving is better done together so I’ve been back over in the UK for a bit.

On a positive note, the weather has really started to pick up in Italy and it’s been lovely to spend a bit of time in the garden again. I’ve even been attempting to hone my (entirely non-existent) gardening skills. I’ve discovered that weeding is surprisingly relaxing (even though my current level of expertise leaves me unsure of what is and isn’t a weed). Somewhat linked to that, I went to a fabulous event in Urbisaglia hosted by Il Salto which showed us how to identify wild plants primarily for the purposes of eating or even medicinal use. It was one of the first nice days of the year and it was a really good group so we had a lot of fun and learnt a lot. They run a few similar events and I’d thoroughly recommend it for anyone in the area interested in that kind of thing.

We collected our wild plants, then had a lovely buffet lunch which everyone had contributed to and then went to the local library to identify our plants and learn more about them. Alas, at that point, they were a little dead looking.

I’ve also been out and about on a few trips…

I do love Rome. It’s one of my favourite cities. There’s just so much to see and there’s such an eclectic mix between old, really really old and new. It’s an artist’s paradise – one could never be bored and certainly I wasn’t when I was there and managed to squeeze in a few sketches. I’ve discovered it has my favourite shop in the world too – an art shop near the Pantheon. I could probably have spent the entire 3 days just in there! Here are a few of my quick sketches to make a change from showing you photos… 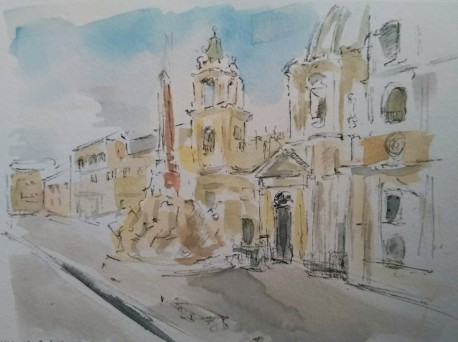 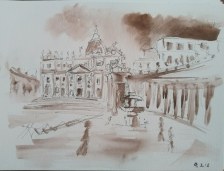 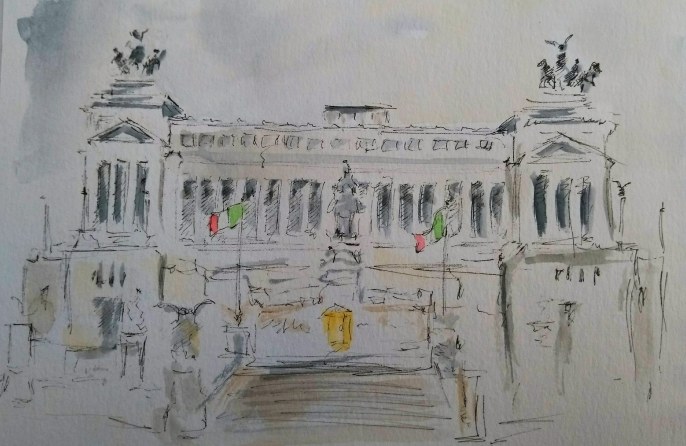 I also went to Venice to meet up with a friend. It was just a short trip – less than a day really but I got to see a new part of Venice for me (near the Biennale Gardens). It feels like we uncovered the “real” Venice rather than just the tourist area. Venice is such a stunning city that it sort of overwhelms the senses. We stayed in a gorgeous hotel called Liassidi Palace in the centre overlooking one of the canals so it really was a special trip all in all. 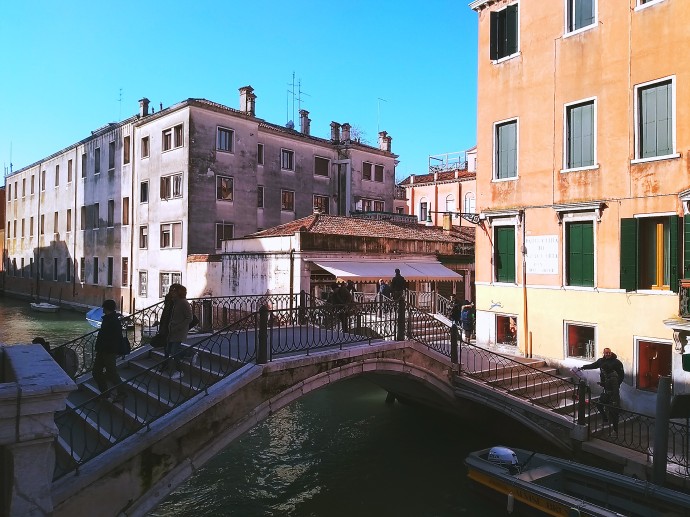 View from our hotel window!

I have some paintings up at the gym on display – I’m feeling quite famous every time I head to the changing rooms. I might put some portraits up there too in the next month if they’ll let me to see if I can get any commissions. I’m quite keen to do pet portraits but I’ve lost a bit of momentum on that in the last few months with one thing or the other. I have entered a couple of painting competitions but haven’t had a great deal of success so far but fingers crossed for a future one.  I painted this one below for the SAA Alive & Kicking competition (here’s a link if you want to browse my competition!)…

A life drawing class has just started as well which I’m enjoying. It’s a combined class with younger Italian students and English ex-pats. This was a quick watercolour sketch done in the last class.

I had some success this month on the photography front and won a prize for being one of the winners in a Touring Club Italia photographic competition – have a look here to see my photo. I’ve won a weekend away for two somewhere yet to be confirmed! I’ll keep you posted.

Finally, I’m thrilled to announce I’m a gold medalist swimmer! GOLD! (Yes, admittedly there were only two people in my category for that particular race but still, that’s just  a petty detail). I did quite badly really – my nose clip came off after the first length and I spent the following three lengths drowning. I did manage to beat my personal best in a competitive race though (it being my second gala ever that wasn’t particularly difficult either). Technically, all I need to do is not drown quite so much in the next race and I should beat my latest personal best too.

I think that’s it from my side. I wish you all a good week or two.

Apologies it’s been such a long time between posts again! I hope you’ve all been well.

It’s been a bit of a sparse year on the blog post front, I know. I struggled at the beginning of the year. It was all a bit of an upheaval after the earthquakes which were still going on and then with headaches and my cats dying, I lost the will to write! Things have certainly picked up again now and I’m back into a routine. In fact there are so many bits and pieces to update on it’s difficult to know where to start which is the other reason for the delay! I do miss writing though and I  particularly miss the photography side as it’s become apparent that the blog is the main reason why I’m motivated to try and take good photos. So this post will be a relatively brief one to catch you up with the latest and then I hope to get back to being a bit more frequent after Christmas.

There’s good news and bad news on this front. The bad news is that nothing at all is happening in the reconstruction of my house. The good news is that I shall be getting a flat in Sarnano courtesy of the government until my house is rebuilt (in 2089?).  It’s a new-build and won’t be ready until Spring 2018 (but this is Italy so add on a few months/years/millennia). I’ve had a lovely summer staying in the house of my friends near Servigliano and they’ve very kindly said that they’re happy for me to stay on there for a bit longer (thank you A&R!). From going from no house to two house possibilities is an excellent dilemma to have. I do miss Sarnano – it still feels like going back “home” when I visit. However, the flat there is on the 3rd floor in a block surrounded by lots of other blocks which isn’t really an ideal living situation for me or the cats! I’ll see how things go in the new year. However, it’s such a big relief that I’ll at least have somewhere I can  put furniture and things that are still in my old/falling down house and somewhere that’s “mine” again on a more permanent-temporary basis!

The view from the house isn’t too bad! 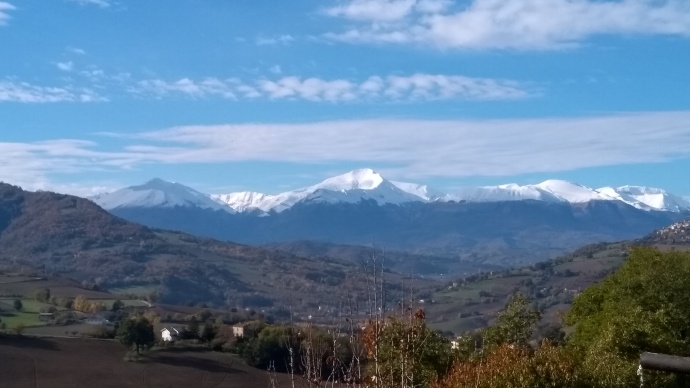 And now there’s quite a bit of snow…

In other news I’ve been….

I’ve joined a swimming club at my local gym/swimming pool. My fellow swimming buddies are a lovely bunch and we had a good time at my first swimming meet (why are they called ‘meets’ when it’s a race? It was so chaotic, I barely met my own team, let alone anyone else!). I was initially very nervous about racing. I swim fast compared to the average swimmer in the pool but I certainly don’t ‘race’. Physical exertion has never particularly appealed to me and all of the sports I’ve done to date I’ve always been able to do at my own pace really.  I imagined my races (50m and 100m backstroke) would be quite humiliating not even really knowing what time I could do them in, let alone what a respectable time is.  However, I held my own and came 3rd in both of my races (out of 4 but who’s counting!) and actually nobody was watching (even my instructor!) so there wasn’t the slightest bit of pressure.

Osimo, the location of my first swimming meet!

The only time anyone pays any attention is for the really speedy swimmers so really, I’m quite happy with my distinctly average speed. It’s nice to have a personal best to beat. The next race is in February. I’ve been practicing the physical exertion thing and I can almost do 100m without needing to be resuscitated. Almost.

I’ve joined a choir! I saw this particular choir in the summer and I thought they were great.

A couple of my aunties and friends are in choirs and they’ve inspired me to give it a go. I didn’t think they’d want me – my Italian accent is poor (it sounds authentic to another English person but the Italian’s take the micky out of me saying I sound like Laurel and Hardy. It turns out the Laurel  and Hardy films are quite popular here. They’ve dubbed them into Italian but given them ridiculous English accents. That’s apparently what I sound like). However, they were pleased to have me as they’ve been singing English Christmas songs. It’s nice to get back at the Italians by constantly correcting their pronunciation of “the” (it’s not “duh”) and “virgin” (it’s not “veergin”) and “thou” (it’s not “dow”)! We had our first concert this week at a church and apparently we sounded alright! The next one is on Saturday.

The only downside with the choir (and it seems all choirs everywhere in Italy) is that rehearsals start at 9.30pm and by the time we’ve finished singing and I’ve got home, I’m completely wired and unable to get any of the songs out of my head! I find myself having to turn the radio on at 3am just to listen to something that’s not about ‘duh veergin Mary’.

And then perhaps in my most exciting news…

I’m thrilled to say I think I can legitimately call myself at “artist”. My self-imposed definition for artist is to have sold paintings to random people and I have! There was no coercion, nobody was obligated to buy my paintings or say they were good so I’m chuffed to bits really.  It’s been very satisfying. The first exhibition was earlier in the year which was in conjunction with a few other local artists, mainly Italian. My art group booked the same space for a couple of weeks this December. We’ve had quite a few visitors and we’ve sold some paintings. I’ve also agreed with my gym that after the exhibition I can put up some paintings there too which will be a great opportunity to show some of my paintings. I’ve been focusing more on pet portraits lately and I’ve been trying to get a website together with a view to selling things on a wider scale. If you’re in the area, then we’re still open until the 17th December 2017 so come and see us.

So all in all, it’s been a busy few months but they’re the main things to report back on!

I’ll write more in the new year but meanwhile, Merry Christmas and a Happy New Year to all! 🙂