Well it’s been a very mixed couple of weeks here.

Generally I thoroughly recommend being an ex-pat. Living abroad and learning a different language and about a different culture is eye-opening. Every day is exciting because there’s always something new, something weird on the TV, a strange festival you’ve never heard of or a new phrase to learn. I don’t know whether that lets up at some point after years in the country, but at the moment I find it just as refreshing for the soul as ever almost three years on. However, being an ex-pat does come with its down sides. The most difficult thing by far is being away from friends and family and rather than it getting easier with time, it gets harder as everyone, including me rather depressingly gets older and frailer. It’s only a 2 hour flight to get back to the UK from where I live in Italy but it takes a full day by the time you take into account getting to and from airports etc. Then of course it’s difficult to drop everything in your new country because you’ve built a life there – work commitments etc. And herein lies the heart of the matter, deciding to live away from family and friends because the weather is nicer and it’s just more exciting, seems an inherently selfish choice! It becomes increasingly difficult to reconcile that choice when something bad happens at “home”. Last week, my grandmother died. So, it’s been a sad few days but I feel somewhat cheered that she fully supported my life over here. Despite being almost ninety she used to always read by blog and when I came home was full of questions.

On a far less depressing note…. I finally got to go to a place I’ve been meaning to for the last few months, Laturo. Laturo is a little village in the middle of the Abruzzi Mountains. In the 1950’s there were 50 families consisting of about 200 people living there. By the end of the 1970’s the last family had left and the village was left to go to ruin. It really is in the middle of nowhere, there are no roads to get there. I had attempted to come here with a group a couple of months back but I mistook directions. Now some of the houses have been bought, vegetable patches have been planted, a new church has been built and other aspects are all slowly being restored with the help of a group called Amici di Laturo (Friends of Laturo). We met a few other walkers/explorers whilst we were there and were offered a beer with them! I hate beer. I know that people’s tastes change over time and I’ve actually grown to like olives and coffee when before I would have thought I was being poisoned. So every so often, I try beer. Usually I’m left wondering why beer manufacturers go to such lengths to make the stuff when the dregs of my washing up water probably taste the same. Anyway, in Laturo, drinking with some random men, I discovered a beer I actually like. But it was a local artisan beer that the guy had bought with him that I don’t think I’ll ever be able to find it again! Anyway, what nice people you can meet out and about 🙂 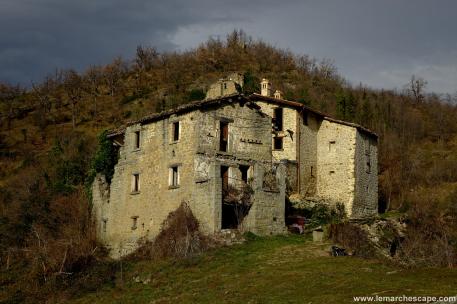 The edge of the village…

Off the edge of a precipice toilet

Collection of objects from the village

Inside the newly built church

I also went to see an Italian / Irish music band last week at a pub in Civitanova. You might remember a few weeks ago I went to see an Italian / American Country music band and was gobsmacked at how authentic the music and accents were. This time was the same – authentic even to the point of not understanding half of the words.  Anyway, that was a lovely night and I discovered that the pub does a good veggie burger meal!

And my doodle of them on a place mat!

Weather wise it’s been a very interesting week! At the beginning of the week there was so much wind I’m surprised it wasn’t called a hurricane! One tree blew over by the house blocking one road and a big branch fell down blocking another. It’s been good for wood collecting though to top up my supplies which I’m a bit worried about to be honest! Yesterday we had our first snowfall and today it continues! Hopefully I’ll be able to get out and do some snowboarding this week.

In other news, I’m just in the process of getting house insurance. Buying insurance here isn’t a simple case of going online to one of the comparison sites. I can only think of one here and it gives you about 3 very expensive options.  You can go to specific companies and they might be able to give you a quote but even that’s rare. It seems an absolutely archaic way of going about things, actually having to SPEAK to someone! Still, I braced myself and contacted my Insurance Man who sold me the car insurance. I told him how much I paid last year and what the policy covered (that was an online thing but for stupid reasons, I couldn’t renew it this year) and he came back with a much cheaper and better policy. So perhaps this archaic way of going about things isn’t really all that bad.

I’m on a “making bread stocks” mission at the moment. I’ve just made several sourdough loaves and next up is pita bread, hamburger buns and pizza bases. I’ve also resolved to make a new recipe every week so working my way through my new Christmas recipe book as we speak (thank you Mum & Dad!).

And this morning I narrowly escaped (in my opinion!) being mauled to death by four angry dogs. There’s a breed here local to this part of Italy, Pastore Maremmano. They protect sheep flocks from wolves so they’re pretty vicious when they need to be. And very, very protective. I went for a walk this morning nearby. I could hear the gentle jingling of sheep bells but didn’t think much of it. When I turned a corner, two of these large dogs came running at me, teeth bared.  I thought that was the end of me! They slowed down and followed me up the road and then another one came running behind me barking. Then there was another one up ahead that had thankfully just veered off the road so I could at least head back home and then another one joined in at the side to ensure I was properly scared away (I was, I was!!). I shall not be walking here on my own for a while.

I think that about sums up the last couple of weeks here. I hope you’ve all had good weekends! I’ll leave you with a photo I took on the mountain above the Garulla Rifugio last week…