Where to stay in Umbria:

I’ve only stayed  in one place in Umbria so far but I would certainly recommend it: il Casale di Mario – an agriturismo (an agriturismo, for people that haven’t come across them yet, are places to stay out in the countryside often on a “working farm” of some sorts). It’s on the outskirts of a little village in the Umbrian hills called Montecchio about an hour and a half drive from Rome. 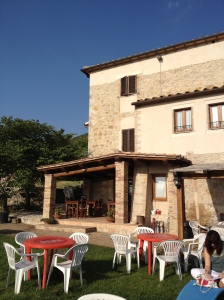 On a couple of the evenings, the landlady lit fires there – it was positively roasting the entire duration of our stay so it couldn’t have been for heat. It was a very fragrant fire, so I thought perhaps the Italian version of incense or scented candles but then the last time, we saw that she’d been cooking something in there. Very authentic!

The place was very quiet, just the soundtrack of crickets and chimes tinkling somewhere in the light breeze. I like Il Casale di Mario a lot. 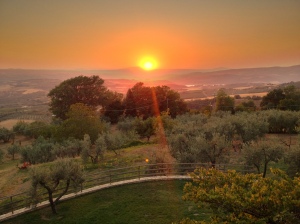 Breakfast in the mornings was nice. Coffee, little crisp squares of French toast with home-made apricot jam (made from the produce of the tree about 5 metres away), yoghurt, some home-made lemon/orange cake and then some kind of tart. On the last day, she even brought out a panacotta dessert for us. I assume this is traditional Italian breakfast fare. Unless they assume it’s traditional British breakfast fare. Perhaps it’s all a total misunderstanding and we both cultures just eat cereal for breakfast. Either way, anywhere that serves cake at any time of the day is ok by me.

And let me tell you. The Italians, eat more food that I imagined was ever possible. They had these antipasti dishes, which I had always thought was basically a starter but the plates are massive and simply couldn’t have been – they were twice the size of plates we have in the UK and it was piled high with food. We decided that in these parts antipasti must be a meal in its own right. The couple next to us had one of these each, and also had a large salad with it which did seem a bit excessive but each to their own. Half an hour later, having cleared their plates, their waitress brings out a giant pizza each too. The Italians or at least, the young ones, are all tiny and toned, WHERE DO THEY PUT IT ALL?!

We got to Todi at about 8pm for something to eat. It was a ghost town! The main piazza was lovely; very large and there were restaurants around but there was nobody in them. And still the chefs glared. By then, we’d decided we’d have to relax our criteria and just go anywhere with food. I mean, deep down, they must want to make money? Perhaps they don’t realise that glaring at people walking past scares people off. Perhaps that’s actually the hard sell for Italians.

We headed to the doorway of a pizzeria. You couldn’t see inside – it was a nerve racking moment. The waiter suggested we walk to the garden terrace where upon there were HORDES of people – Italians and tourists alike. The terrace was beautiful – tables under a large wooden lattice type structure covered in flowers and it had an amazing view of the surrounding countryside. Success! The pizza’s were fabulous – large, thin, crispy and the house wine was beautifully fizzy (legitimately – it was frizzante). So my recommendation to anyone that goes to Todi wanting dinner is to head to Pizzeria Cavour. It only cost €24 for both of us.

Our first trip of the holiday was Perugia (of Meredith Kercher and Foxy Knoxy fame). It was about an hour or so from Montecchio. Perugia seems to be a good area for language schools. Alas, I’m afraid I found it quite disappointing. It wasn’t as pretty as some of the hill top villages we’d driven past, the architecture didn’t seem quite as spectacular and the buildings were a bit more run down.

The shopping area contained I think only one affordable shop, and the rest were expensive lingerie shops (which in fact featured in every location we went to – the Italians must be kitted out in the most glorious lacy numbers), expensive clothes shops, expensive makeup shops… do you see where I’m heading? It was a lot smaller than I’d imagined as well. There was quite a cool (literally), underground tunnel thing going on – if you park at the bottom of the hill, there’s a series of escalators that take you to the top with the final one coming out underground in what looks a bit like the Mines of Moria from Lord of the Rings – large caverns with other large cavern off-shoots. Very interesting and I think my favourite bit of Perugia. I’ll have to research the history of those.

On our general tour around the area the following day, we visited Orvieto and Bolsena. Orvieto is lovely. It’s quite a large village and again, on top of a hill where the houses seem to grow out of the rocks beneath them. The village has a surely unnecessarily huge cathedral (il duomo) – the inhabitants of the entire village could fit in twice over I’m certain. The shops around the cathedral sell pottery – terracotta ornaments that you can put outside the house on the walls and glazed plates that you’d put inside.

There were a couple of olive wood shops selling anything and everything made out of the very smooth, multi-coloured olive wood. Very nice. I’m often disappointed that I’m not the kind of person that has a house full of nick-knacks and memorabilia.

The rest of the shops sold expensive lingerie again, expensive ornaments or were giving the locals expensive haircuts. The shops were mostly empty. It’s pretty much the height of tourist season. I’m not sure how they make a living. Perhaps that’s why things are so expensive. Perhaps they only need to sell a couple of things in a day to make ends meet. Having said that, if all their shops are so expensive, then how on earth can they afford anything? They must have to get a mortgage out just for their lingerie alone.

After wandering around in Orvieto we resolved it would be a good place to come back to for dinner. And then we headed out to Bolsena where apparently the lake has healing powers. By the time we got there, it was all shut up for siesta so we wandered around for a bit looking mournfully in shop windows (or at least, I did. I suspect Lee’s look was one of glee). It looked pretty. We had our lunch overlooking the very pretty lake. In general, I had a good vibe about Bolsena, it’s just a shame everything was shut!

On our last day, we decided to head to Terni. Terni is average. Compared with the other places we’ve seen, it wasn’t particularly pretty and the buildings were unkempt. We resolved to find the cathedral and some green space before making up our minds. We found them and then promptly made up our minds. Terni on the surface of it, does not appear to be all that.

We went onto Narni next because it was mentioned in the things to do on our agriturismo’s website. Twenty minutes later we arrived at the “town centre” according to TomTom but it was just somebody’s house. I suspect if we had been less hot and bothered by that point, we could have got out of the car and found an actual town centre but instead we decided to drive back.