The horrors of learning a new language…

How is everyone?! Today’s discussion will be dedicated to language learning, a subject close to my heart!

It’s been a while since I’ve moaned about how impossible learning Italian is. My lack of moaning is not because I’ve improved so much as because I’ve grown accustomed to my abilities (or lack thereof!). I will add a disclaimer here – to all those that don’t speak Italian, I will sound, without a shadow of a doubt, absolutely fluent. And I will also add, that it’s not often that I can’t make myself understood or that I can’t understand what someone else is saying. If “ability to communicate” is the goal of language learning, then yes, I probably have that nailed. And that is a fine goal if you don’t live here. However, that is absolutely not my goal. I am not content to just communicate,  I want to do it well! I want to come across as the same person when I’m speaking in English as when I’m speaking in Italian. That’s what being fluent is to me.

Our opinions, thoughts and beliefs are what make us who we are. Yet when you’re learning a new language, you’re taught how to order food, book hotel rooms, provide some basic personal information. Quite rightly too. And of course for holidays etc., that’s more than ok. But imagine you’ve moved to your new country and you want to integrate with your new community: try making friends with that rather limited vocabularic repertoire! Expressing yourself well requires a reasonably good understanding of how to string sentences together.  You can get away with pigeon English in English speaking countries – people will know what you’re talking about but it’s not quite the same in the Italy.  In Italian there are 90+ different ways of saying “run” depending upon who by and when it is being done. It’s the same for every verb. You can’t just use one of them in a sentence and expect people to know what you’re talking about. With every single noun, not only do you have to learn how to say it in Italian, but also whether it’s female or masculine  (my little mental dictionary has images of chairs wearing skirts etc.) because that effects all the other words in the sentence. My point is, you may hear me ordering food and think I’m fluent, but I would find it a challenge to discuss the intricacies and potential impact of the upcoming Brexit referendum.  It requires a vocabulary that I still don’t have and a mastery of the congiuntivo verb tense that I don’t have. I could get by but until I can do that comfortably, I feel like the person that I am here is still just a shadow of who I actually am.

However, I wouldn’t change it for the world. I enjoy speaking Italian. Thinking in a new language is not only interesting, it gives a new perspective on everything. Nobody becomes fluent overnight and I give it a good go and, well, life continues.  Sometimes though, something will bring my inadequacy with the language to the forefront: a silly mistake or a comment from someone.And with any other subject matter, that would be like water off a duck’s back. I can take criticism or mickey-taking on every subject without taking great offence. But my Italian, that’s different. Language learning requires such a lot of time, dedication and in fact, courage that it can be a very touchy subject for a lot of people, an Achilles heel. I’ve known people that, despite understanding the language, refuse to speak it because people have been unknowingly insensitive in the past. To put yourself out there and speak to people when you know you’re going to make mistakes, particularly at the beginning, can be an incredibly daunting prospect. Yet, there is no other way of improving other than to speak the lingo and to have someone correct you. Making mistakes really is the only way you can get better.

I must be getting marginally better because comments are generally rare these days. But last week, I received my biggest insult yet! I was in a shop, asking if they had any digital pianos. Alas, that shop didn’t but the owner recommended a shop in the next town that did. Then he added “is there someone that could go with you that speaks Italian?”. I was mortified! It’s not that I was speaking in English to him! So, in need of reassurance, I spoke to a couple of Italian friends who confirmed that “technically” I can speak Italian but that my accent “fa fatica” (is a struggle) for anyone that hasn’t known me for ages. I am a struggle to listen to!!!!!  I mean, I was not expecting to be accent-free but I hadn’t ever imagined that people would find it tiring to listen to me!

After a few days of giving myself a hard time, on further discussion with others, I think in fact the shop owner might have had ulterior motives. I have thus reviewed my decision to no longer speak Italian lest I make people’s ears bleed as they struggle to understand me.

However, my ability to communicate as a result of that experience, has been stunted by the appearance of ‘Evil Sue’, my nasty, judgemental imaginary sidekick. ‘We’re our own worst enemy’ as the saying goes and`Evil Sue` only crops up when I’m feeling “Italianly vulnerable”. During conversations she gives the increasingly `Flustered Sue`, such helpful feedback such as: “why did you SAY that? You KNOW that chairs are girls, you KNOW that you go and FIND someone in Italy and not SEE them (it makes me think the entire country is playing an eternal game of hide and seek). What are you, an amateur?! You’ve been here 3 years!!!”. Meanwhile the conversation with the real person understandably gets increasingly nonsensical whilst I am being harshly remonstrated by ‘Evil Sue’. It’s a terrible vicious circle and ‘Evil Sue’ ends up with an exhaustive supply of ammunition.

Improving requires correction and so I like to be corrected. I have a friend who tries to help with my accent. Apparently I mispronounce my ‘t’s in some words. She’ll say a word with ‘t’  in it, I’ll copy it exactly, she’ll tell me it’s nothing like what she just said and repeat it, I again copy it exactly and so it goes on. On one occasion another English speaker was listening in and he found the whole conversation amusing as he couldn’t tell the difference either. It would make for a good comedy sketch show I think. By the end of these sessions, myself and my friend are both about ready to kill each other. I’m comforted by the fact that my English learning Italian friends also struggle with the English accent. They find it difficult to differentiate between the sound of “bed” and “bad” and “growing” and “groaning”. On moaning to my mother about it, she found this interesting article about how adult brains just don’t differentiate certain sounds.  I’m marginally more comforted that it’s not me being inadequate so much as it being difficult for everyone when they’re older!

So the point of this blog? Firstly to try and explain to people that think I’m fluent, why  I don’t feel remotely fluent and why it’s important to me to be a lot better at Italian than I am! Secondly, to explain to my Italian friends why during some conversations it must seem like I’m having a stroke (please don’t frown and look bemused, try not to let on that you’ve noticed and then it might improve!). Thirdly, to provide a bit of solidarity to the other language learners out there that are struggling with the same internal ‘Evil’ sidekick. I shall certainly be trying to speak to myself in a more constructive, less scathing tone in future! Fourthly, to warn people of the dangers innocent comments can have. It’s a very fine line indeed and I have absolutely no doubt I must be guilty of hurting people’s feelings too (apologies to those if I have)! I mean, some of the mistakes people make are so hilarious one can’t  help but laugh and in general that’s ok. Everyone has war stories of the time when they asked someone if there were “preservativi” in the jam for instance (“preservativi” does not mean preservatives in Italian, it means condoms)!!! If you’d learnt a new language without embarrassing yourself on at least several occasions I don’t think you’d be human. In summary, it’s a minefield but what I think I’ll do personally is to be more flowing with the positive feedback with my language learning buddies in the hope it tames their ‘Evil’ sidekicks and I think that really is half the battle! 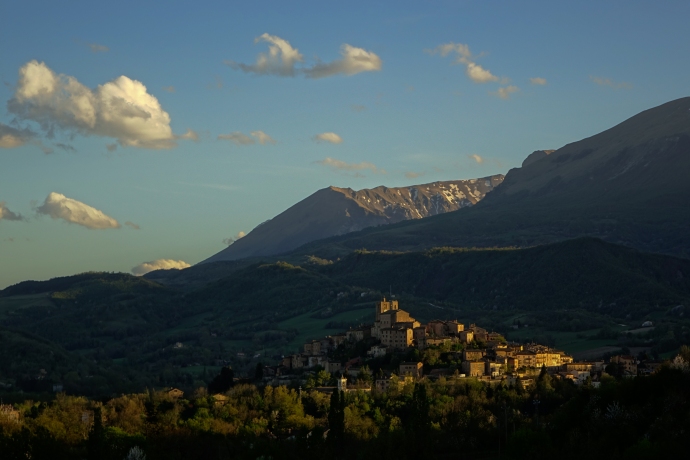 Italian learning might be a challenge but when you wake up to such beautiful scenery every day, it’s all worth it

10 thoughts on “The horrors of learning a new language…”