How is everyone? It’s been lovely here! I had the first evening without the heating on yesterday. As much as I love the stufa (woodburner), it does get a bit tiresome lighting it and cleaning it out everyday so that was a nice break.

This is near Macerata, isn’t it pretty? Now that the yellow flowers are out, I’ve established that the bitter veg that the neighbours have given me is actually oilseed rape.

I’ve been trying to make the most of the sunshine. Here’s a run down… If you’re interested in this week’s exciting “Property of the Week”, skip to the end!

I’ve been meaning to go to Lame Rosse for months after seeing some photos of some weird and wonderful rock formations online. Last weekend, I finally decided to do it and printed off some instructions for the walk. True to form, the walk instructions bared absolutely no resemblance to the actual walk, and in fact, were positively misleading. I had to ask directions from an old guy who kept on looking me up and down and said how I couldn’t, as a woman, go on my own and it was dangerous (he couldn’t be specific although I did ensure it wasn’t because the route was frequented by rapists and murderers). It’s not like I was wearing stiletto’s and an evening gown for goodness sake! In the end he gave me the directions but said that he wouldn’t be accountable for anything that happened to me because he didn’t approve of my going!!! So, the red rag had been waved and I decided to do it anyway. When I parked up, I joined a little group (two disabled guys and their girlfriends no less!) that were also doing the walk. The path is all up hill for an hour and a half but it’s not too steep and it’s a nice wide gravel path with limited options to make mistakes, unlike all of the other walks around here!

Anyway, Lame Rosse was spectacular and well worth the up hill journey. Don’t let any old guys put you off – apart from the incline, it was a breeze. 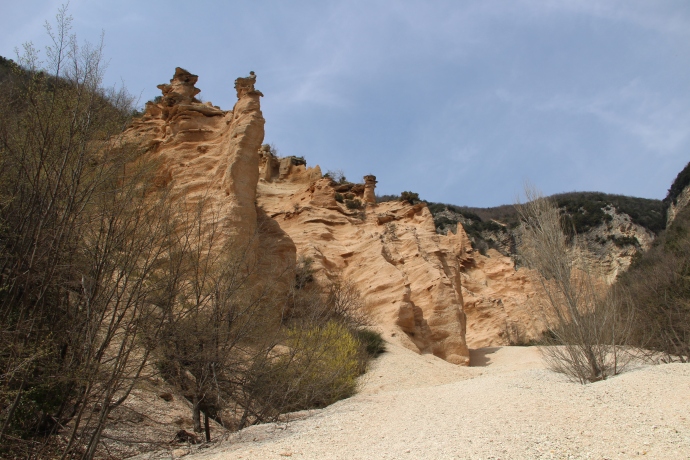 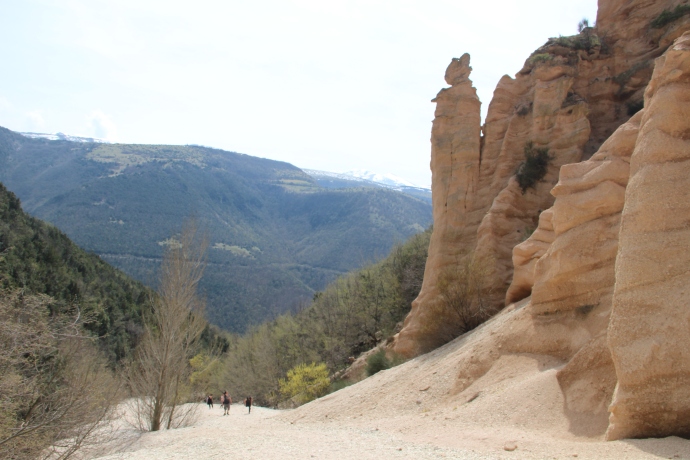 My next “big” walk is going to be to locate the Gola di Fiastrone (the throat of the Fiastrone river) which is again, only a few minutes drive away and the photos I’ve seen online look amazing so I’m looking forward to that.

Sightseeing in Visso and Frontignano

My lovely neighbour and her sister took me to the heart of the Sibillini mountains on Sunday.  It was a spectacular drive and not too far away at all really. We had a wander around Frontignano which has ski slopes up Monte Bove – I definitely want to try out those slopes next year. On the way back we stopped in Visso, a beautiful and brightly coloured little town in a mountain valley.

It has some ruins which I believe you can walk up to – I’ll do that next time I’m there.

Visso taken from a very majestic war memorial on the hill side.

Sunday in Visso is market day and there were lots of cute little crafty stalls.

And this was taken by Frontignano. 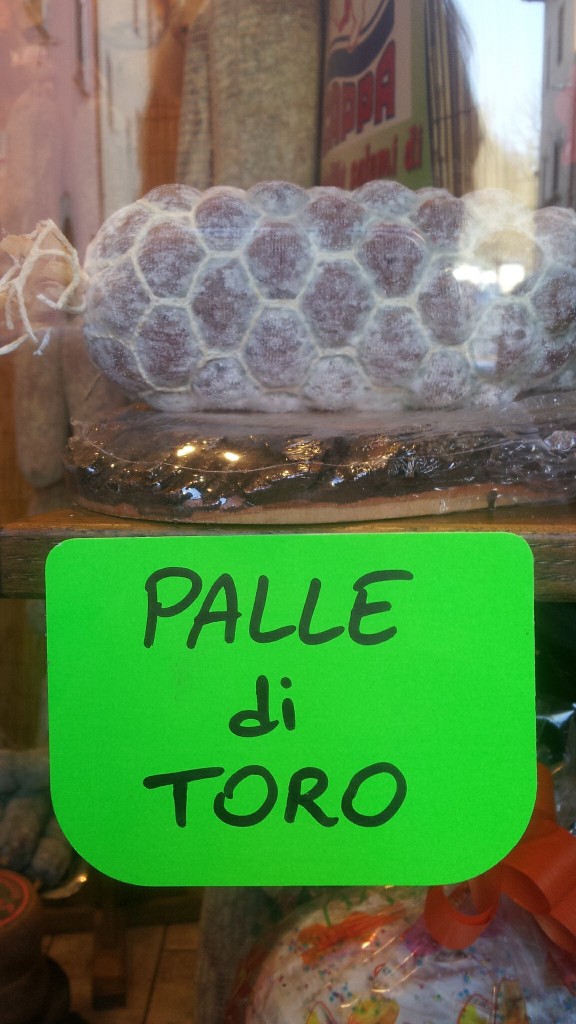 This delicacy, in a butchers in Visso, can literally be translated as “Balls of Bull”. I’m assured that it’s not the real thing but I’m not convinced.

DIY continues at a steady pace. There’s a door sized niche in the wall behind the sofa in the living room. We’d been wondering what purpose it served. Anyway, whatever it was, I didn’t want it there. I have grand plans for a ‘photo wall’ on which to display my pictures, so I dismantled the niche this week (it was blocked off with wood) and it turns out that it did indeed once be a door. Now it has a floor to ceiling waste pipe in the middle. I felt slightly less guilty about blocking it off having acquired this new knowledge. So, I put some wood up and have plastered over it. However, I doubt the resilience of my blocked off wall. It bends when you poke it. I’m hoping the top layer of plaster will harden it a bit and make it less of a flexible wall!

First plastering attempt of my Flexiwall! I hasten to add, there will be a top coat of plaster!

I made some headway in the Scorpion Den / Cantina this week as well and cleared out several bin liners of stuff. There’s nothing in there now that I don’t know about (I inherited a mass of junk) so at least that’s a decent start. It does need a lot more work though. I need to clear out the Snake Pit too (this is a little room under the steps to get into the house which has the water stopcock. If any of you remember Indiana Jones and the Temple of Doom, it resembles the hidden passage that the leading lady finds in her room but hopefully without the booby trap skeletons). I do not want to clear out the Snake Pit even slightly. However, the neighbour has said that it needs to be done otherwise turning the water on and off will be even more traumatic than it already is.

I also painted the bathroom ceiling because it was all flaking off. After prodding the flaky bits, whole chunks of plaster came off too so I’ve had to do a bit of plastering there as well. As soon as I had finished painting, the paint started flaking again.  I think I have a special “anti-paint” ceiling.

And finally, I have constructed a garden masterpiece out of some old bricks, a sink and a Christmas tree.

Just what every garden dreams of… The bricks are occasionally moved around the back garden because I don’t want to get rid of them in case we want to build something with them in the front garden. And the sink is impossible to move so I think it’ll be a permanent fixture!

In other breaking news this week, I’ve made the heaviest object known to mankind. I found a round wooden table top downstairs in the cantina and have stuck a mirror onto it and used up most of my sea-glass as a mosaic around it. I think it looks quite good but I can’t take a picture of it that shows it at its best as I can’t actually move it from the floor so I’m going to leave that photo out until I can somehow get it hung. I think I’ll have to get a crane.

Property of the week – Church of the “Madonna di Loreto”

I walk past this church regularly on some of my favourite walks from Sarnano – it’s in a beautiful location and right next to a waterfall. Here’s a picture and some information, both taken from the Presitigious Building website which has more photos of a stunningly painted inside as well as other properties in the area.

The church of the “Madonna di Loreto” was  constructed in the XV century by the “wool guild” constituted by craftsman of the textile, weaving texture and colouring cloth mill.

In 1619 the church was in part reconstructed and restored as it now appears, for the devotion of the Madonna, in relationship to the promenade from the south that where going on a pilgrimage to the sanctuary of the “Madonna di Loreto”, situated north and in the direction of Assisi in Umbria.

The building is constituted of a single central nave in a rectangular form of approx. 17.30 m x 7.30 metres and approx. 8.00 metres in height, orientated with its principal axis north – east,  south – west; the entrance is exposed south – west while on the opposite side is situated the sanctuary constructed in a heavy vaulted ceiling in spider – formation probably built in the XVI century.

On the side adjacent to the stream is positioned the priests residence home developed on a two – floor layout.
The church nave is covered with a barrel – shaped vault constructed of a cane and gypsum chamber supported to the wood truss – beam roof being the main constituted part of the supporting roof structure. The higher part of the walls and the vaulted ceilings are decorated of relative paintings of the Madonna di Loreto,  paintings that dates back to the XVII century and of valuable exquisite workmanship of its perspective.

In the centre of the vault is a configuration of the holy home of Nazareth of Loreto with the Madonna and the Angels, a glimpse partial view of the arcade open gallery is positioned in front of the “holy home”.

The paintings cover an area of approx. 175 sq.m. of  remarkable importance to emphasize the partitioning wall of which contains the altar painted an architectural structure in a canopy form with six red Verona marble pillars, giving a splendid perspective of the perfect elements of a remarkable architectural effect.

The entire building is constructed of masonry brick – work in red cotto externally left as it appears.

Have good weekends all!

One thought on “Bull balls, Scorpion Dens and Snake Pits…”