Neighbour watch, the Damp Wars and One Match Wonder…

How is everyone? It seems like ages since I’ve written. I’m still here! I’ve just been doing other writing! Anyway, I thought I’d check in and give you a run down of the last few weeks.

I just want to say how much I like my little patch of Italy.  I was just trying to describe it to a friend and it all sounds so obscure. Quaint but obscure. I don’t know how much I’ve ever described the house and the setting so here goes. My house is in a little hamlet which is a 5 minute walk from the main road. In the hamlet there are maybe 5 habitable houses and one of those, mine, is split into four separate dwellings. There’s a few rustic buildings littered about too which are falling apart and have tree’s growing through the middle of them. Everything in the area used to be owned by a large farming family. “My” house is about 145 years old . My specific bit covers three floors and is over and under the next door neighbour’s section of the house in a very odd configuration. Another neighbour entirely owns a room directly underneath my kitchen. It seems strange but according to my investigations with the neighbours, it’s always been like that. There are often chickens roaming outside around the houses and there’s a couple of dogs that seem to regularly come here from several miles away to chill out on the front steps. One of them is the size of a small horse. Batfink the cat dislikes them intensely and so requires an escort to and from the house.

The community is really nice. My immediate next door neighbour is always dropping us food and fruit/veg. She’s been taking me on several tours of the area and introducing me to everyone under the sun. Two doors down there’s a really nice couple that again, give us food, lots of advice and lots of DIY support and tools (he’s a metal worker by trade). There’s a couple on the other side further up towards the main road that have offered us free wood, as long as we can clear it off the land – they’re really friendly too. Further up still, 5 minutes from the house, there’s a “forno a legno” which seems to be basically a rustic sort of bakery. That’s really nice and they give us new stuff to try rather than the bog standard (saltless) loaf of bread. They own a little corner shop as well but because it basically looks like someone’s house I’ve not had the courage to go in but I’ve recently met the owner so I’ll pop in next week. I’ve never really felt like part of a community before – in London, you basically kept your eyes on the ground at all costs and speak to no-one! I don’t think we could have asked for a nicer, friendlier area.

We’ve had some Italian friends over the last couple of weekends which has been lovely.  Everyone seemed to like the house and the area. We tried a couple of “traditional English” meals – an afternoon tea for one of the lunches and a roast dinner with our other friends.  For my Italian friends that haven’t come across those yet, an afternoon tea generally consists of sandwiches, then scones with clotted cream (the best thing possibly in the world – alas, you don’t have it here!) and strawberry jam and then sometimes cakes. Roast dinners are usually a lump of meat (I’m vegetarian so substitute it with something else), roast potatoes, yorkshire puddings (not a pudding!) and maybe another vegetable dish covered in gravy (a type of sauce). Both seemed to work out ok!

The countryside here at the moment is spectacular with all the autumn colours. Unfortunately I didn’t take out the decent camera so the photo’s are a bit poor. I’m hoping to go out later this week when it’s sunny to get some nice ones.

A church (I think?!) near Lago di Fiastra 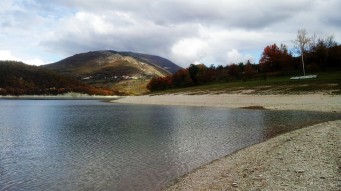 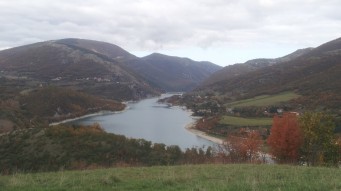 In the DIY sense, we’ve finally finished putting up the panels around the bath using bits of wood left over from the kitchen and put some beading up around it. It’s had duct tape around the bath for ages to protect the lumpy weird concrete the builder used to mount it. So it looks really nice now in comparison, despite my bad sealant efforts.

We’ve been putting various vents in (see Damp Wars below) and finally have an extractor fan in the bathroom. We finally have a bedroom light too, something that was sadly missing when we bought the place.

Otherwise it’s been a bit slow on the DIY front recently but hoping to get back on the DIY horse shortly.

Damp continues to be a big issue in the house, mainly the bedroom. I’ve been told by neighbours to go around with bleach which kills mould spores so I’ve been doing that. A few weeks ago I spotted a bit by the wardrobe so pulled that out and it was absolutely thick with mould behind. Ugh! It’s not a nice job clearing that stuff I can tell you. It’s also got into our new chest of drawers. It turns out my “hayfever” is “mouldfever” and has substantially improved since I resolved the wardrobe issue. I’m having to go on a de-mouldifying mission in the bedroom every few days. I’ve been told you can’t eradicate damp from these old houses but I’m hoping at least that we can improve it. So, we’ve embarked on a war against damp!

All furniture is a few centimeters away from the wall to allow the air to circulate, we’re going to put vents in almost all of the rooms (according to the websites air circulation is key, and our damp meter seems to back that up), windows are open when it’s a nice day, the stufa is on in the evenings to provide “dry heat” and we’re putting the dehumidifier on in various rooms, including the cantina downstairs to try and draw as much water out of the walls as we can.

By the end of winter, we’ll be Damp Eradication Experts.

I’ve done it! Just call me One Match Sue. So, I know that absolutely no one will be interested in my fire starting methodology but here it is anyway! I have tried all manner of fire starting methods including little wooden teepees and pine cones stuffed with bits of paper and tissue etc. The way to start a fire, in our stufa at least, is to create a little pile of tissue and card and set that alight and then start adding little dry wood twigs to it.  Fires need air underneath, our stufa has a section underneath it to collect the ash and has a little grate in that too. If you open the door entirely and let the air in under the fire, it acts as though you’ve just poured petrol on it. It’s like a fire turbo charge.

The neighbours said that residency wouldn’t be difficult to obtain. I told them that it would. Of course it would. It’s never, ever easy here. The last two times, they have required countless documents, private health insurance, proof of savings, work contracts, letters from the language school, proof of address, ID, special stamps that you have to pay for at the tabaccheria etc.  They all thought I was lying. So it was with mixed feeling that I was able to obtain residency in about 10 minutes with just a passport. Why it would vary so much within the same region mystifies me.

However, nothing is ever simple and although I got away with obtaining my residency without having to get private healthcare insurance I then tried to register for a doctor and I apparently need it for that! My neighbour has decided that I should register myself as unemployed so I can receive free healthcare. I’m slightly concerned that means I have to actively look for a job. Booooo….

On another note, I’m annoyed I didn’t face my residency acquisition fears earlier because now, I have to pay IMU, a sort of “second home” tax, even though I don’t actually have a second home here. That came to 146 euros for 4 months. If I’d have registered when I moved in, I would have just had to pay regular tax which is 80 euros a year. You live and learn I suppose!

Right, that’s it from me. We have a horribly early start for a bus trip with 40 of our neighbours to Gradara and Candelara a couple of hours north from us. That’ll be an interesting day! I’ll report back with some photo’s in a couple of weeks.

For now, buonasera a tutti!

3 thoughts on “Neighbour watch, the Damp Wars and One Match Wonder…”