How is everyone? Apologies for my absence! It’s been a bit full on these last few weeks trying to get the house in order and I’ve had some friends from the UK out to stay too. It’s been really good to show them the new house and area and they seemed just as enthusiastic about the place as me so that was good! 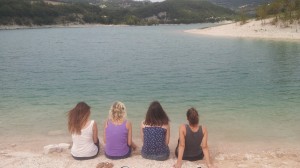 Me & my friends looking out across Lago di Fiastra. Thank you for coming girls!  🙂

I’ve been feeling quite unproductive these last couple of weeks as far as the house is concerned however, writing this post has done wonders for my sense of achievement – things are happening, albeit slower than I’d like.  I’m definitely going to keep up with the “stuff done” list if only to keep up my moral! 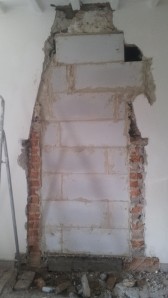 Step 1: Building. We ran out of cement in building the wall so we had a “ventilation” hole at the top for a while. 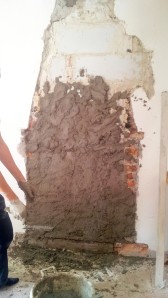 Step 2: Chucking malta bastarda at it from a distance. Following a later skype with my father, it appears unless you’re building a mud hut in Africa, this is not how to apply it. Worryingly it was my builder who recommended this technique. 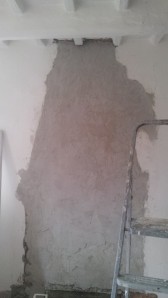 Step 3: Top coat (ish) of plaster. We still need to do a top top coat. As er, all professionals surely do. None of the regular tips to make sure your wall is straight apply with this wall. Nothing about the kitchen is straight.

2. Filled in floor holes where various walls and fireplaces used to be using special floor filler. The below is the fireplace hole. I’m about to do a cunning paint job on the living room filled hole to make it completely indistinguishable from the surrounding tiles. Yup. 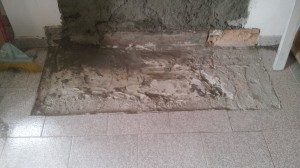 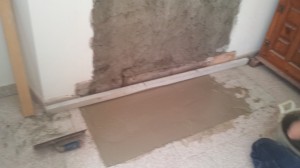 After… (a bit blurry – I think that helps it looks a little neater in fact so that’s good!)

3. Painted the bathroom and bedroom doors so it doesn’t look quite so unwelcoming going to bed/to the bathroom. I’ve done three coats now but it still needs another and all the paint is cracking at the sides. I think I must be painting over some sort of special paint dissolving lacquer (I hasten to add that I did a thorough sanding job of it first). We’re using “odourless” paint – it smells disgusting! 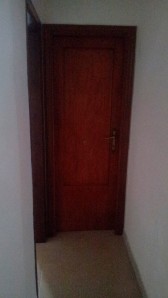 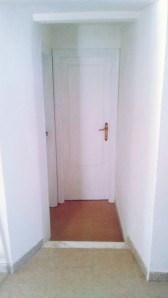 …and after: Much less gloomy eh? The doors were quite badly made and so it also serves to hide that a bit! 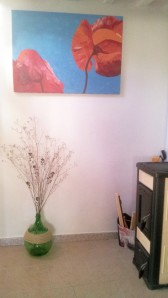 The locals couldn’t have been any more curious / scathing about my stick acquiring mission.

5. We put up an impossibly difficult mosquito net over the bed. I got ratty with it. Stupid mosquito net. 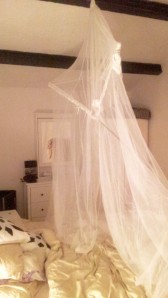 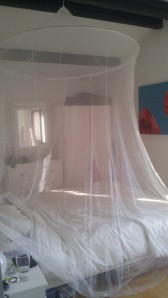 How it’s supposed to look…

6. Pane Caldo dug up some more tree stumps from the garden and we’re now splitting that up because it’s apparently good for fruit trees (we’ve been saving our plum and peach stones for growing – at the moment they’re in the fridge so they think it’s winter and then apparently that will encourage them to flourish when we finally take them out). 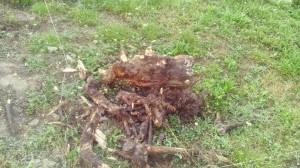 7. We bought a TV.  And then we got it back and realised we don’t have an aerial. That was an expensive realisation because then….

9. We have a bath! The bathroom was a challenge mainly because the plumber didn’t want to be tied down to pesky dates and times. And who would? “Ci penso io” he said when asked when he’ll turn up which is basically akin to “yup, I’m on the case”. I should have tried that tactic in my old job. The job needed to be coordinated with having the builder here. In Italy, they like to cement your bath in. I did try and raise the prospect of a more English type installation but they dismissed me as crazy. I hope I never want to take that bath out and I particularly hope there are no issues with the waste pipe. He needs to come and put in the washing machine now. I have a rigid set of dependencies for the kitchen to go in and he’s decided that actually he wont come today after all. Maybe tomorrow at some point. HMM. 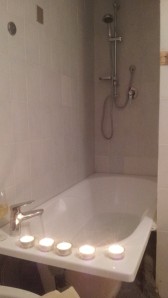 Admittedly it doesn’t look at all special here (and it’s probably not) but it’s a functioning bath and I’m thrilled about it! Just need to sort the sides of the bath out now.

10. I’ve tried to tidy up the bathroom walls a bit – they were riddled with screw holes and chips and cracks from the paneling which was up before. 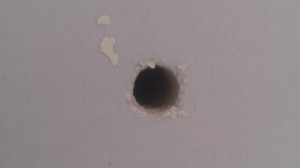 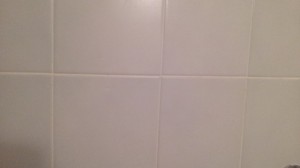 No hole. From a distance, I think my patch job is amazing. Better even still if you’re standing outside of the bathroom. However, if you look at it in a slightly different light, it looks like I’ve patched it with another completely unrelated colour. I’m going to investigate tile paint to paint the whole lot. Has anyone used it?  Any tips?

11. We’ve started taking paint off the beams. It’s soul destroying! I think it will take years to do using my current hitting it with a mallet and scraping bits off strategy. It’s so demoralising I’ve not touched it for the last couple of weeks! 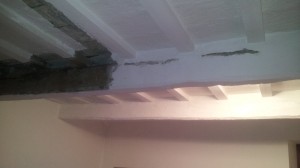 Before (sort of). When the wall was taken down, this beam in it’s natural wooden glory was underneath so we were hoping to restore the others to a similar style. However…. 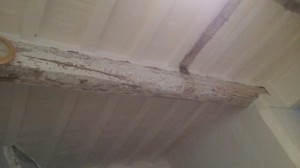 12. We’ve bought a sofa. I’m really really excited about having the sofa but it doesn’t come until the end of October! Meanwhile we’re sitting on horrible armchairs and there’s only two of them.

13. I have put up a bookshelf. Not just ANY bookshelf but one in a niche which didn’t have a single straight line. It was made perhaps even more challenging because in an effort to do things cheaply, I’m using only stuff that’s already lying around the house/Scorpion Den (cantina/basement). 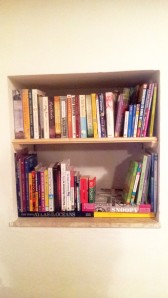 Looks like a bookshelf eh? I don’t think I did too badly for a first attempt.

14. I am in the process of giving our living room tables a makeover. 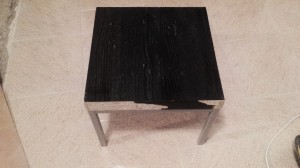 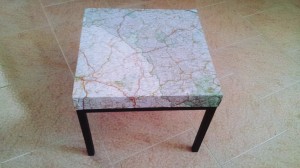 15. I haven’t made a decision about heating yet. We’ve had the stuffa (wood burning stove) on a couple of times and it does do a very good job at heating the stairs area. Perhaps we’ll need to sit on the stairs and just use the sofa for special occasions during the winter!

On a non DIY related note, I’ve been trying to acquire some kittens from the next-door neighbour. It’s going slowly but it is working. So far named kitten characters include: Neve (“Snow”), a two year old white male whose ear seems to be falling off and only has half a tail and Pellosina  (“Hairy but cute”!) a black and white female that’s just had kittens. I don’t know what the others are called yet but I shall endeavor to find out! 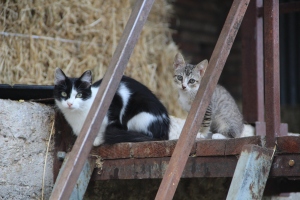 There’s 5 kittens – this is Pellosina and her kitten. Cuties!

I met up with one someone I met through the blog recently too and had also bought a house in Sarnano a while back. It’s lovely to meet someone that’s bought in the area and has been having very similar experiences though alas, she’s only part-time here. Her house is stunning and significantly more finished than ours which has given me a bit of kick to get things done!

In rubbish house news, I completely forgot about the Estate Agent fee’s. There’s a minimum fee we needed to pay and because the house was cheap, even with a discount it’s ended up being about 10%. Very depressing! 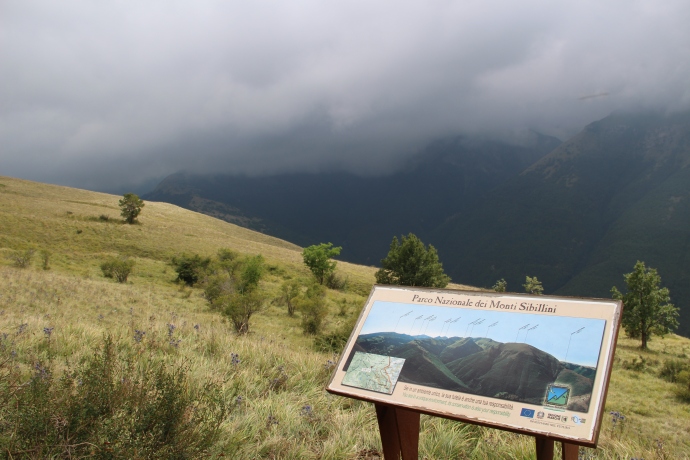 From the panorama point of our walk, you can see lots of mountains. Apparently. We had somewhat of a big cloud so we just saw the base of them!

It’s been very mixed weather of late – it was glorious sunshine when we left and it started getting increasingly ominous looking throughout the walk. Made for some good atmospheric photos though.

Deer watch: The deer have increased to an impressive five deer at the same time now. I’m thrilled Deerdrie has friends and family. It’s rutting season coming up apparently so I wonder what that will mean for the field out the back where Deerdrie and her herd spent their time. Interestingly the Italians are very specific with their deer names. Our ones are not simply “cervi” (deer) but “caprioli” (roe deer). I’m disappointed we’ve not seen any wild boar yet though. Next month the hunting season starts and they start shooting them so in a way I’m pleased that they’re keeping a low profile to be honest.

Flies. We have flies that come into the house when the doors are open – there are mainly 3 types (listed here from least to most annoying): 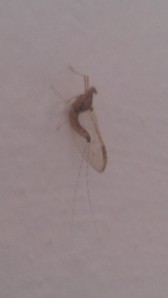 Does anyone know what this is?! It seems to be the least intelligent fly imaginable. You can pick them up by their wings and escort them out the building but I don’t think they enjoy that method of removal.

2. One that flies around in hexagons in the middle of the rooms.

3. One that flies around and lands on things.

I’ve been doing research on fly friendly methods of getting rid of / repelling them which include clear bags of water and I even created a (entirely unsuccessful) fly trap from a coke bottle. The house needs a lot of airing – it gets quite a lot of condensation in the mornings so one of the first things we do is to open up all the windows and doors and then we’re overrun with flies! I need fly screens!

I must have mentioned the issue with plugs before now. The plug sockets in this country are nothing less than absolutely infuriating. There are MULTPLE types of sockets. One requires an exhaustive supply of plug adapters and Krypton Factor style thinking in order to produce a satisfactory result. For instance, our kettle, bought in this country, requires 4 adapters in order to be used in the kitchen. 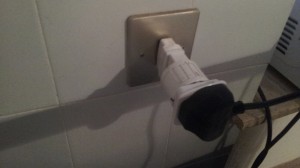 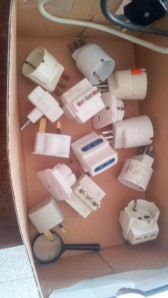 Exhibit B: Box of plugs. Even with all these things, I sometimes have to give up on the concept of getting electricity to some things.

Right that’s it for this week – I’ll try not to leave it quite so long next time so there’ll be less of a bombardment of DIY updates and photos! Have good weeks all…