Well this week has been a roller-coaster of ups and downs!

Mum and Dad came out last Friday for a week to see where I live 🙂 It was lovely to show them around all the things I’ve been talking about for so long. Hopefully they liked it (more than France which they keep going on about ;-)) – we pretty much did the “Sue’s Favourite Places Tour” as well as some new stuff I hadn’t had a chance to do before.

The “Sue’s Favourite Places Tour” took us to (Please Note: If you’re coming to visit me – perhaps skip past this section to maintain an air of mystery):

Lots of fisherman there at this time of year…

View towards Monte Conero from Numana

Pretty graves. When you die, you’re put into a wall here… no rotting away being eaten by bugs… Well, I didn’t see any evidence of that anyway. Hmm – this photo isn’t in focus. 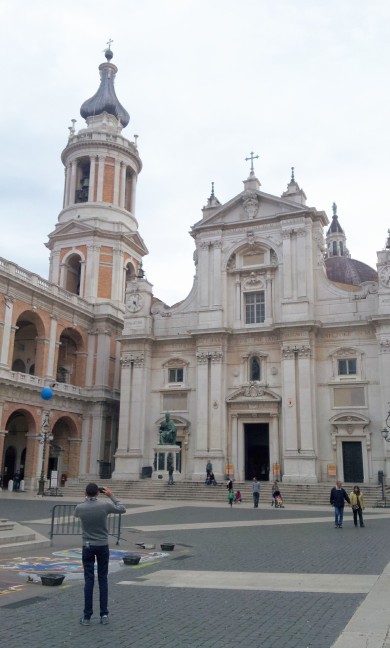 Rather poor to average shot of Loreto. Mary’s house is inside the basilica straight ahead. People go around the house on their knees. They’ve worn two large grooves into the marble. They should probably put some sort of cushioning around the house if people insist on doing that – I don’t think it can be healthy for their joints! 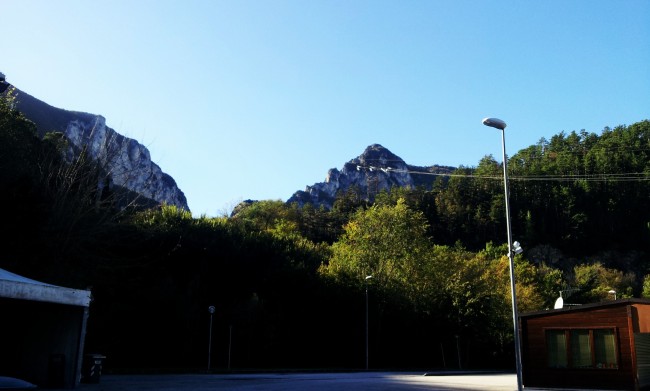 The museum was shut but there was a shop with a lot of accordions… (if you’re coming to visit and you’re worried I’ll try and take you to an accordion museum, don’t worry – this was a one off)

So all very nice. I think I could be a happy tour guide when I grow up. However, all that coincided with…

The Scary Week of Teaching Terror

Which involved teaching… let me see… about 260 children English. It has been stressful. And I’ve started the classes in such a random fashion that I don’t really know who I’ve done what with now. However, I’m now famous (or infamous) in the schools. One of these teaching type websites recommends you start the lesson with a hello song and finish with a goodbye song. I’d found some stuff on youtube.com but there wasn’t internet access in the classes so… I did what any nervous, inexperienced teacher would do and took my guitar in and sang to them. All children in the Marcelli and Numana areas can now sing along to “Hello, how are you?” and “Bye bye, see you again” songs. They are incessantly catchy. I can’t imagine ever having a night’s sleep again without them going round and round my head. Anyway, my reputation proceeded me on the last day and I got a song request even before I introduced myself. It’s a good job my embarrassment threshold is relatively high these days.

My language school that contracted me to the state schools suggested I have lunch with the staff on Wednesday as I’ve got a two hour gap between lessons. “Lunch with the staff” was misleading. It was lunch with children. I was at least 20 meters away from the nearest member of staff. I think I was supposed to be keeping them (the children, not the staff) in order. However, by the time pudding came round, there was a little crowd of children around me and the other teacher had to come to tell them to sit down. I suspect I should have done that.

There was only a couple of er, “difficult” classes so I suppose that’s ok. One teacher said I need to be harder on the kids. I’m not entirely sure how without actually using physical violence. I’ll have to look at the regulations in Italy but I’m pretty sure I can’t do that.

The plus side is that the latest teaching stresses have almost removed my driving stresses! On Monday I actually looked forward to getting in the car.

I HAVE ONE! Marco changed my old bedroom into a living room a week or so back and now I even have a nice flatscreen tv. WOOHOO 🙂

Right, I’m supposed to be lesson planning, not blogging. <Sigh>.

I hope you all have wonderful weekends.