Sunday I headed to an organ concert at a church in San Germano, a tiny little village walk-able from Camerano. The problem with organ concerns in churches is that the organs are generally hidden (or at least the organist is). I left after half an hour, deciding that if I wanted to listen to organ music, I should just buy a CD and listen to it somewhere that wasn’t life-sappingly hot. But it was nice to see another little village and if it wasn’t so hot, I would have stayed. 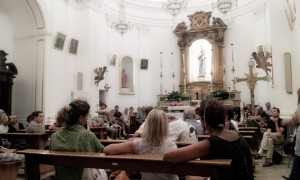 Everyone is misleadingly looking at the front of the church here. The organ was behind everyone above the door and you couldn’t see it!

We went on a boat trip on Tuesday from Numana (one of the close coastal villages) and I finally got to see one of the beaches that I’ve been keen to visit for a while – Spiaggia dei Gabbiani (Seagull beach basically). You can only get there by boat – we didn’t actually end up going to that one, but just went past it and hopped off at another beach, Le Due Sorelle which is also only reachable by boat (There’s a path but you’re not allowed to use it – admittedly it does look a bit perilous) so it was great to finally get to that beach too. The only photo I took didn’t seem to take so I’ve got no proof!

I had one of my top rated embarrassing moments on Wednesday at Cinema Sotto Le Stelle in Camerano – I put my phone on silent like a good cinema go-er and forgot about it. Halfway through, my phone starts blaring out music at top volume. It’s my alarm, not the phone so that’s why putting it on silent didn’t work. There were a few disapproving grunts and tuts in the audience. Embarrassing, but not the end of the world. I go to turn it off. Does it turn off? Nope it doesn’t. I’d swapped the battery before the film and for my phone, that means I have a Fort Knox style pin entry system before I can get into the phone. Everyone is now looking around with incredulous looks on their faces. Very embarrassing. I’ll turn the whole phone off I think. Does the whole phone turn off? Nope, it doesn’t. Ok. Ok. Fine. I’ll take the battery out then. Can I get the back off the phone? Something that I’ve been doing for a year without any problems? No, no I can’t.  By that point, the grunts of disapprovals had turned into sporadic giggles. I decided that I’d just have to leave the cinema and throw my phone into the path of a passing car, so I hot footed it out over people’s laps. As I jumped over the last person’s legs to the door, I was flooded with a sense of relief – the trauma was almost over. Or that’s what I thought until the previously sleeping barky dog (WHO BRINGS DOGS TO THE CINEMA!) that appeared to be guarding the door launched into a tirade of barks, much louder than my phone, subsequent scream of terror and the cinema put together. I’m going to buy a disguise for when I go out in Camerano next.

I met my Couch-surfing pen pal Italian buddy last week. Headed to San Michele beach the first time (where he got a 41 Euro parking fine) and then Senigallia (where I was 4 / 5 hours late and actually never arrived in Senigallia at all – see below!) and then a couple of days later, he gave me a whistle-stop tour around Jesi kicking off with a lovely lunch at Vintora, a restaurant in his home village of San Marcello (near Jesi). After lunch, we headed to Morra D’alba and Jesi as well as a 5 minute left-hand-drive car driving lesson before my train came (where I’m pleased to report that nothing bad happened).  I still vaguely remember how to drive, the problem will be keeping to the correct side of the road. 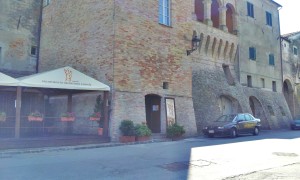 Had a lovely lunch at this restaurant – great food… 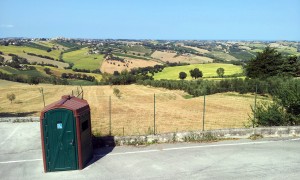 Morro D’alba – there’s a cute little walk that goes around the main bit of the paese – this photo was taken from there. 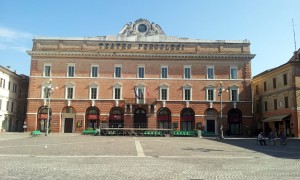 So let me tell you about the Senigallia ordeal on Thursday. It was the “Summer Jamboree” which I was really keen to get to so arranged to meet some friends down there. I looked at the train monitor at Ancona, I identified the train I needed and platform I needed to be on. I went to the platform. When the train came, I got on it. But then, rather than go to Senigallia (20 minutes north), the train went to Pescara (an hour and a half in the opposite direction). Why?  Well, let me tell you why. Ancona station have duplicate platforms it turns out – there are two platform 1’s, 2’s and 3’s in different parts of the station. I went to Platform 3 instead of Platform 3 (?!?!), a terrible and time-consuming mistake! So, an appeal to any Train Station Designers reading this: GIVE YOUR PLATFORMS UNIQUE NUMBERS!!!!!!!! 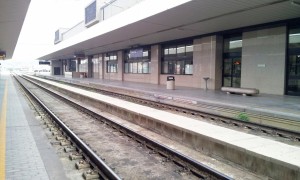 Pescara train station – it was a fascinating evening out…

To get to Senigallia was going to take almost 4 hours from there at that time of night. I decided to give up and go back to Ancona instead (still over 2 hours) but by then there were no buses home anyway. My new Couchsurfing friend who I was supposed to be meeting in Senigallia and who’d been patiently waiting hours for me (he doesn’t want to be “in” the blog – I’ll have to come up with a pseudonym… hmm…) came to get me from the station and we went for dinner in an Agriturismo in Camerano that I didn’t even know existed (La Giuggiola) – it was a good meal and turned out to be a good night in the end. I still feel a bit guilty! I’ve never been 4 + hours late before!!!

I had a chat to Marco about potential teaching opportunities last week – he’d definitely like to set up some English courses in the winter or at least when the weather cools down a bit. I’m hoping to meet him this week to discuss.

This week’s what’s a bit odd:

4 thoughts on “Fun, embarrassment and appeal to train station designers…”