I babbled a bit too much during my last blog post (don’t say anything) so I decided to split it out and publish a separate “Random Oddities” piece today…(today being what I hope is Wednesday if this “publish in the future” business works successfully). So, here’s a few random thoughts outlining some of the differences between the Italy and the UK…

Patriotism – The Italians I’ve met so far are incredibly knowledgeable about their local area, history, traditions, food, wine and just pretty much everything really. There’s a lot of dissatisfaction with the economy and politics but in general, they’re a very patriotic lot on the whole. It’s lovely to see.  Apart from the yobs that hang out English flags every few years for a World / European Cup, I don’t think I ever came across much patriotism in the UK 😉

Clothes – I think it must have been about 30 degrees Celsius at the weekend. It was beautifully sunny. There was not a cloud in the sky. Hot, hot, hot.  And yet, apart from the folk who were out jogging, I think I was probably the only person not wearing full length dark trousers / jeans, a jumper and a padded waterproof rain coat. This happens ALL THE TIME. I’ve been so unnerved by it, that I’ve downloaded an hour by hour weather forecasting app (ilMeteo – it’s very good) suspecting they all knew about some impending blizzard and I didn’t. But no, no blizzards come.

I’ve discussed this phenomenon with a few people now and it seems to be that the Italians are very strict when it comes to the seasons and clothing attire. It’s not yet “summer” and therefore, one should wear spring clothes. Regardless of the actual weather. The English, when it’s sunny, regardless of the season, completely strip off and flock to the nearest beach or park lest they miss summer. It’s probably the most blatant cultural difference I’ve come across so far. I think in time, I will become known as “The crazy English girl wearing summer clothes and takes pictures of walls” (honestly, there are lizards there, I swear).

Weather – now I’m on the subject of it – the weather is incredibly fickle here! It goes from one extreme to the other within a matter of a couple of hours. Last week at school it was difficult to hear the teacher because the thunder was rattling every fibre of the building and the rain was just teaming down. And then a couple of hours later, it was gorgeous sunshine. I think in the UK, we’re pretty stable with the weather – if it’s rubbish in the morning, it’ll stay rubbish for the rest of the day and probably the next couple!

The rain… Oh how it poured… 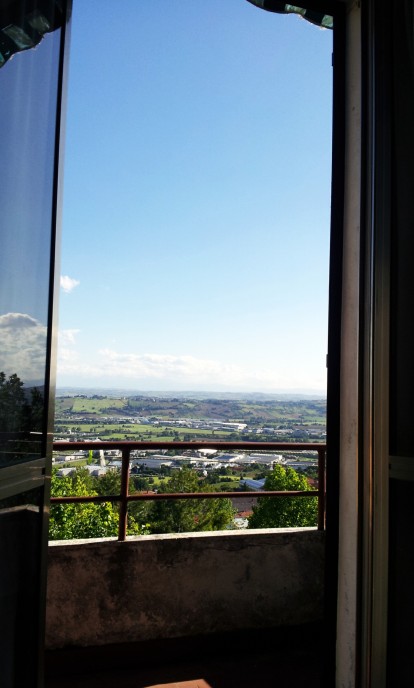 Plate dryer – I know this is mundane, and I know a lot of people have dishwashers but I like it! It’s just a drying rack but it’s in a cupboard so you can give the impression your kitchen is always in a clean and orderly state (until you open the cupboard). I’ve seen them in a couple of houses here – I haven’t seen them before. Great idea I think. 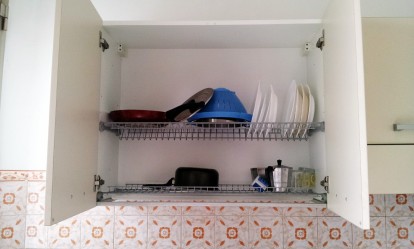 Painting – my room is decked out in posters in plain glass clip frames. Nice posters, but posters all the same. Apart from there’s one original painting, by a local artist called “Bartof” (dead now unfortunately), and I really like it. It’s of a girl walking through an archway. Very simple, but it’s really beautifully painted. Intriguingly, there’s a figure in the archway. Intriguing because it’s not “painted” in as such, and it’s not obvious on first glance either. Marco thinks that the artist painted the Madonna, didn’t like it and then repainted the girl and the arch image over the top. That would make sense. Whatever she did, it really is a lovely painting and just a little bit haunting!

The Girl in the Archway

Directors – do you know the directors of the films you watch?! I’ve no idea. Apart from I’ll make a conscious effort to avoid a Tarantino film. But in general, I’ve not the foggiest. Last year, whilst I was studying with Sonia, my Italian teacher, there were quite a few exercises on describing TV shows paying particular attention to the director. And it’s been the same over here with the exercises. Very odd I thought, to pay such attention to something nobody cares about. But, BUT, they DO! Whenever they talk about a film, they talk about the director! The Italians are a nation of film buffs. Who knew?!

Right, that’s enough observations for now. Hoping to do some serious sight seeing this week so hope to have a decent update next week 🙂

2 thoughts on “Italy and England – a erm, detailed observational analysis…”