The dolce vita, settling in and seeing the sites…

Allora (well!), I’m pleased to say I’m settling in nicely 🙂 So far, no regrets or doubts about whether I did the right thing – I’m pretty content! The view from my apartment is just amazing.

View from my apartment

You can see at least three towns from the balcony off my kitchen but very difficult to see in the photo above (I need my decent camera which I had to leave at home!): Osimo (right), Castelfidardo (middle) and Loreto (left) and in the background the very majestic Siblini Mountains. They rise up to the cloud level here in the photo – again, my camera’s not good enough to pick it up. They’re difficult to see sometimes anyway because of La Foschia (a sort of summer haze) but it’s pretty breathtaking when you can.

Camerano is perched on the top of a hill – a lot of the Italian towns/villages are, around here. There’s a lovely paved area with a viewpoint – in a couple of weeks there’ll be chairs and tables out from the bar that’s close by so that’ll be nice to go to in the evenings. I’ve taken loads of pictures – I’m going to try and write up about each town I visit but it’s taking ages! Anyway, click here for the main Le Marche page and click on the links to the various towns for photo’s and in time, hopefully more!

It has a wood right at the top which has well kept gravel paths but it’s very small as you’d probably expect for the top of a hill. You wouldn’t really want to meet any axe murderers in there – there’s not really much scope to escape (see mother – I am baring my safety in mind :-)! Admittedly I acknowledged that, and went in anyway but still…Forewarned is forearmed).

Wood at the top of the hill in Camerano

I hear there’s some market stalls selling fruit and veg in the morning most days but I’ve not actually been out before school yet so not seen them. I’ll do that next week I think. There’s a bigger market on Wednesday selling clothes. In the afternoons, all the old men in Camerano seem to hang around in gangs outside the shops. The women it turns out, are busy cooking dinner at home. I am not naturally suited to the male/female role division here and it’s probably one area of the Italian culture I’ve no intention of becoming suited to either!

Most evenings so far, I’ve had dinner back at the apartment whilst watching CSI USA dubbed in Italian and very handily available with Italian subtitles.

The people are nice. So far, I’ve met:

Trattoria in Camerano – Stick with it, the food is worth it! 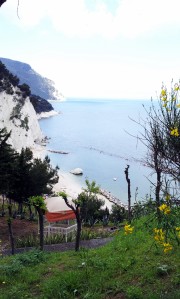 Taken from Numana towards Mount Conero

Piazza Roma in Camerano taken from the Gelateria

In terms of other stuff I’ve been doing – every week we get a programme of activities – this week we went to a town called Recanati and we had an authentic Italian cookery lesson (with Marco’s German wife :-)) followed by eating it with Marco’s family and friends at his house. Think this week we’ll be going to Mount Conero for a walk, potentially to see the “Two Sisters” – a couple of big rocks out in the water that’s inaccessible apart from what sounds like a rather perilous walk down some cliffs or by boat. I’m quite looking forward to that. I’d probably be looking forward to it a bit more if I had anything other than flip flops and a pair of gripless trainers.

Recanati is a very nice little town/village/paese with a lot of cultural things to do and museums etc. It’s set in some really lovely countryside – rolling green / golden hills, lots of pretty flowers, vineyards and olive groves. In terms of cultural stuff – despite making a concerted effort to pay attention for the purposes of being enlightening for the blog, I just can’t retain that kind of info so here are some photo’s instead and click on the link if you’re interested in anything else! There’s a museum sort of exhibition next on the 18th May where I think all/most of the museums in Le Marche are free. Much better than that, on the 25th/26th May, there’s some kind of Cantina Festival where you basically visit people’s cellars and drink the wine they’ve made. Sounds good – I’ll try and find out a bit more about it for the next blog. 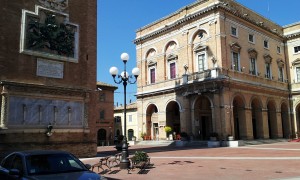 Yesterday, I went to Portonovo with the other student on the course. Portonovo is a gorgeous bay below some cliffs. Incredibly picturesque. We didn’t stay for long though – only because it’s a flat fee with parking and we were too stingy to pay for the full day (only 4,50 euros or something) and then we headed to Senigallia. 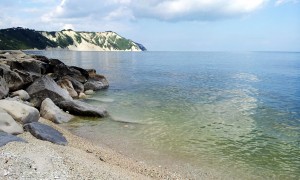 From the beach in Portonovo

along. At the moment, it’s all pretty empty and shut, but I think it’ll become a lot busier next month. The Italians appear to take a mass holiday from work from June and go to the seaside for weeks/months at a time. They really do have a fabulous work/life balance!

But it means though that the towns get a bit run down during the winter months and in the summer months, it’s a bit too commercialised and family orientated for me. It’s made me realise that I’d much rather live somewhere in the hills/mountains with a view but close enough to go to the sea when I want.

Senigallia has a castle – it’s 2 Euros to wander around it and look at the exhibition. The exhibition is a bit sparse and the bits that were there are a bit hard going to read but it’s cheap and it’s nice to see out from the top so I’d recommend it.

In terms of other stuff I’ve been up to, I’ve got a little checklist of things to do every day: homework from class, Italian verb conjugation exercises (using the wonderful Italian Verb Trainer app on my phone), some Italian reading, some Italian writing (in the form of a diary), and then some kind of exercise every day and something creative every day. I’ve done neither of the last two but exercise is difficult here. Marco’s shown me a reasonably flattish bit of land where I can go “jogging” which I might attempt today. There’s a swimming pool quite close but I think it’ll be traumatic to get to at least the first time.  I’ve done nothing at all creative bar take my paper and pencils out with me everywhere I go and I’d hoped I’d be a bit more creative than that! Hoping to do some this week.

Just as an aside for things people might want to bring me over (!): Squash – you can’t buy it here (as in the juice concentrate you mix with water). You can just buy juice, which is obviously nice but expensive so I’ve been mixing it with water but I’m not entirely convinced by that concept. And multivitamins appear to be very expensive and surrounded in pig bone (gelatine). So in an ideal world, I would quite like squash and pigless multivitamins. And the washing up liquid has the consistency of water, not washing up liquid. Having said all that, I would much rather be without them but with grissini and Stuffer’s yogurt (not together mind). So all in all, Italy is coming out very much on top.

Anyway, seems a lot of information, sorry! I’ll aim to do smaller updates little and often rather than epics every now and then! 🙂

Been to any of the places mentioned? Got any hints and tips? Feedback below!