WEEEELLLLLL!!!! The flight is <checks ticket> Saturday at 18.25 from Stansted and let me tell you…. it’s a bit stressful trying to fit all your stuff into two bags. I believe I have to sell a family member for every 1kg I’m over my allowance. It’s a shame, I quite like them.

So this is the plan:

Things to do in Le Marche

I’ve been doing some research into what to do in Le Marche when I get there – I’ve got several brochures from the Italian House during the Olympics last year. On the face of it, they look very useful and in fact, I’m sure they are. If only I could bring myself to read them! My mind wanders after the first couple of words – they’re not very entertaining <flashback to book club>. And there’s not a single paragraph. Well that’s a lie, there is a single paragraph. Perhaps I should create some Italian brochures with at least two paragraphs and potentially, headings.

I’ve signed up to Le Marche’s quarterly newsletter. That site has quite a bit of info on about the area and events. I came up with a good list of things to go to see and do. Which I’ve promptly overwritten. Annoying.

I’ve been looking at train travel too – it’s about 3 and a half hours (and 19 euros) from Ancona to Rome and a similar sort of time to get to Venice as well. And there are ferries which go from Ancona to loads of places in and outside of Italy. I’ll definitely look at that. I wonder if I could add ferry travel to my sailing hours for my log 🙂 Oh I went sailing last weekend with some lovely random’s from the Sailing Networks website on their trimaran – quite, different from the last boat! Here’s a pic of it: 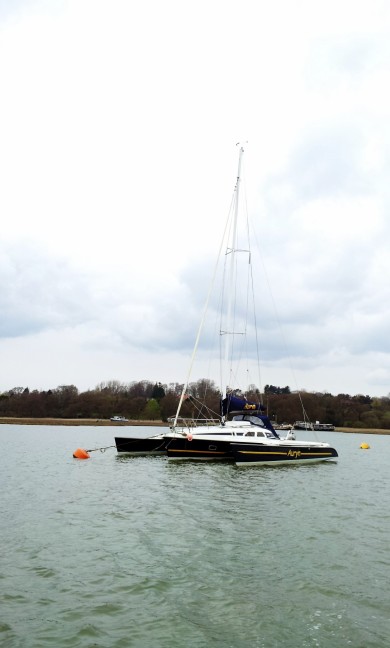 The Dragonfly 920 Trimaran I was out on last weekend

I left it a bit late to get the credit cards you can get for travel abroad which I think are a good option. I have, however, gone for a couple of pre-paid cards. I’ll be interested to see if they work! The Post Office card one was recommended to me so I’m pretty confident that one will work. But you have to pay 2 euro’s to take out money from the cash point. Having said that, it seems a needless point of clarification given it will be impossible to withdraw cash anyway – as far as I can tell, there’s no pin number! I’ll phone them today to see how they imagine that might work. And it was a bit of a faff to register the card (you need to activate it after 10.30 the next day. I’m BUSY!).

The other one I got was a Travelex “cash passport” card  – same kind of thing but the Travelex guys on the phone weren’t a) able to reassure me that anyone would take their card and b) that the people that do take it wont put some of their own costs on. And there was a long story about how the card will assume if you’re in a cafe/restaurant, that you’re going to pay a tip regardless of whether you do or not and that eventually the “bill” will settle. WHAT?!?! Having said that, it was less faffy to register for it, it was activated immediately, there’s no “activation code” you have to keep forever and you don’t have to pay for withdrawing cash.

I phoned Smart Currency Exchange too  – they can transport money from one bank account in England to one in Italy at a good exchange rate. Alas, I’ll not have one in Italy for a while so not a go-er in the short term.

I’ve been looking more at healthcare in Italy as well. Health insurance is far too expensive. As an EU member, I get healthcare provided free of charge, similar to the NHS. I need to register for a doctor at some point – I think I’ll need a fixed address for that though so might not be for a couple of months. If I need a prescription, the general consensus from the internet forum’s is that I can sort of wink and nod at the person over the counter and they’ll give me whatever I want (within reason and for a price).

In other news, the girls from home are now on Skype and Whatsapp which I’m pleased about! Makes it marginally less scary to know that there’ll be people at the other end of a laptop/phone. Having said that, I’ve already used up my data allowance for the entire month in about 3 days due to Vodafone’s fabulous updating of my phone which wiped everything, switched wifi to “off”, switched mobile data to “on” and then took off my data limits during a period where I’ve become obsessed with the Scramble app <sigh>. If you are my friend, and you’re not on Skype / Whatsapp, PLEASE GET SKYPE AND WHATSAPP IMMEDIATELY 🙂

Right, probably my last post before I head off. Wish me luck. I will be annoyed if the plane crashes.